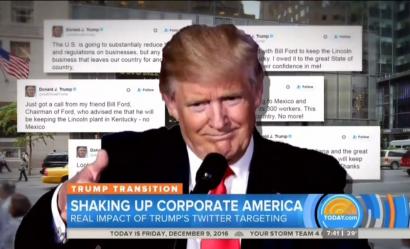 At the end of the panel discussion on the most recent Fox News Sunday, host Chris Wallace asked the Associated Press's Julie Pace how big of a deal she thought President-Elect Donald Trump's "transparency" in moving away from direct involvement in his business interests would be.

Her answer came across to me as self-important, given that she basically said that the she and the press were going to consistently report on it "whether they (the public) care about it or not." Wallace appeared to react similarly. His response to her answer was delicious, especially because it ended the segment: "I think Donald Trump's going to determine his own interests, not Julie Pace." Ouch.

The discussion concerned Trump's determination, as stated in a prerecorded interview segment with Wallace during Army-Navy game Saturday, to keep his family involved in the Trump brand businesses, even as he has declared that he won't be involved at all. Whether that's the best move in the circumstances should be driven by its effect on Trump's ability to carry out the duties of the presidency. From the panel discussion, it appears that at least two members of the media won't accept anything short of the "blind trust" maneuvers in which career politicians have usually engaged.

As seen in the beginning of the video segment below, Wallace fretted that the media would obsess over Trump's posture, and later also reminded everyone in the panel that "the conflict of interest laws ... do not apply to the president and the vice president."

As if to prove Wallace's point, Chuck Lane of the Washington Post predictably characterized Trump's position as a "target-rich environment" for the media, and the President-Elect's attitude as "defiant." He contended that Trump should be "going the extra mile" to take the issue off the table.

At that point, Wallace went to the AP's Pace for a final comment.

Here is that segment:

CHRIS WALLACE: The American people may respect it (Trump's position on financial transparency — Ed.), but, Chuck, I'm not sure the media is going to respect it. I would think they're going to -- we are going to be all over him.

CHARLES (CHUCK) LANE: This -- this is what reporters call a target-rich environment because every single hotel, business deal, land, whatever, will be fly-specked for any -- I mean you just -- the one you said in the -- about the Philippines is a perfect example. And it would make all the difference in the world if the President-Elect himself had a somewhat different affect and attitude about this. His attitude in the interview with you was very defiant and he said -- and he invoked some vague doctrine that says, you know, the law says I can do --

WALLACE: Well, no, no, but in fairness, the -- the conflict of interest laws, correct me if I'm wrong, do not apply to the President and the Vice President.

LANE: That's true (In other words, "You just caught me making something up, darn it, but I'll pretend to ignore that." — Ed.), but he could say, and he didn't, "It doesn't matter, I’m going beyond that. It doesn't matter because the absolute need to avoid any appearance of impropriety, I'm going to go the extra mile." And he seems actually to be taking the position like, "I'm going to do the minimum that I'm entitled to do."

WALLACE: So, Julie, we have less than a minute left. You’re -- as somebody who's going to be in the front row of the Trump press room, how big a deal is this going to be?

PACE: I think it's -- I think it’s going to be a significant part of our coverage of the presidency. I don't think it's going to be every day the dominant story. But if I'm President-Elect Trump, I would want the American people to know that I don't have any conflicts of interest. I think it's in his interest for his presidency to be more transparent, to be more clear with the public. Whether they care or not, I think it's in his interest to give us more information going forward. It would be less of an issue the more transparent he is.

WALLACE: I think Donald Trump's going to determine his own interests, not Julie Pace.

Thank you, panel. See you next Sunday.

So Julie Pace thinks she can do Donald Trump's thinking for him, saying that "it's in his interest ... to be more transparent." She also thinks it's important to make the issue continually visible, even if the public doesn't care. In other words, she telling AP's audience and the world that "We're going to keep a parade of conflict of interest stories going as consistently as we can, whether you like it or not."

This perfectly exemplifies the condescension and arrogance one routinely detects lurking barely underneath the surface — and sometimes above it — in so many AP reports. Basically, they're going to beat to death the stories they think are important, especially ones that might be potentially damaging to Republicans or conservatives, because their sense of priorities is correct, and the public's isn't.

No wonder Wallace responded as he did.

Thus, Pace signaled (as if we didn't know already) that we're almost certain to see four years of AP reporters trying to shove their sense of what's important down our throats, with a heavy concentration on negative stories about Trump, Republicans and conservatives — because having the public see them in a bad light is Priority One. If the public doesn't care, well, they plan on doing everything they possibly can to make them care.

This is why New Media will continue to thrive, and why the establishment press will continue to suffer — unless the "fake news" campaign being carried out by the press and its leftist friends succeeds in marginalizing alternative voices.