The Wall Street Journal ran a blockbuster story Tuesday afternoon ("U.S. Spy Net on Israel Snares Congress") about how the Obama administration's National Security Agency's "targeting of Israeli leaders swept up the content of private conversations with U.S. lawmakers." In other words, the NSA spied on Congress. As talk-show host and commentator Erick Erickson drily observed: "Congress began impeachment proceedings on Richard Nixon for spying on the opposing political party."

Whether or not Congress has the nerve to defend itself and the Constitution's separation of powers, what the Journal reported is objectively a major story. Yet the Associated Press ignored it on Tuesday, and most of Wednesday. Finally, at 7:15 p.m. Eastern Time on Wednesday, the AP ran a story by Erica Werner — about how Republicans are planning to investigate the matter.

When it ran the story, the AP included it at its "Big Story" site, which of course begs the question: If it was such a "big story," why did you wait over 24 hours to cover it?

Here are the first five paragraphs of Werner's story (bolds are mine throughout this post; the graphic was obtained from a CBS News broadcast report): 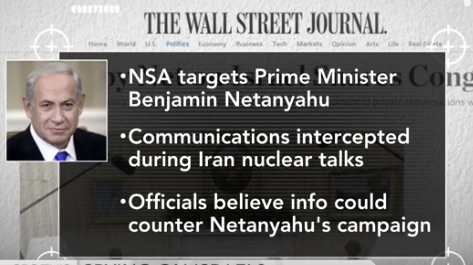 The chairman of the House Intelligence Committee said Wednesday his committee will look into a report the U.S. spied on the Israeli prime minister and in the process swept up communications with Congress.

Republican Rep. Devin Nunes of California told The Associated Press that he's asked the director of National Intelligence and the head of the National Security Agency to come to Capitol Hill next week to brief lawmakers on the matter.

A report in The Wall Street Journal said that even after President Barack Obama announced two years ago he would limit spying on friendly heads of state, the NSA kept watch on Israeli Prime Minister Benjamin Netanyahu and top Israeli officials.

In the process the agency caught some conversations with U.S. lawmakers, according to the report.

That's something that would typically be reported to top congressional leaders and the heads of the House and Senate Intelligence committees, but Nunes said he recalled receiving no such notification.

Werner mischaracterized the Obama White House's promise made two years ago after it was revealed that the NSA was routinely spying on allies. It wasn't about "about friendly heads of state." It was about "allies," i.e., allied nations, and their "government" leaders, not only their prime ministers or presidents.

This is what President Obama said on January 17, 2014 in announcing a new presidential directive:

... Let me now turn to the separate set of concerns that have been raised overseas, and focus on America’s approach to intelligence collection abroad.  As I’ve indicated, the United States has unique responsibilities when it comes to intelligence collection.  Our capabilities help protect not only our nation, but our friends and our allies, as well.  But our efforts will only be effective if ordinary citizens in other countries have confidence that the United States respects their privacy, too.  And the leaders of our close friends and allies deserve to know that if I want to know what they think about an issue, I’ll pick up the phone and call them, rather than turning to surveillance.  In other words, just as we balance security and privacy at home, our global leadership demands that we balance our security requirements against our need to maintain the trust and cooperation among people and leaders around the world.

... The bottom line is that people around the world, regardless of their nationality, should know that the United States is not spying on ordinary people who don’t threaten our national security, and that we take their privacy concerns into account in our policies and procedures.  This applies to foreign leaders as well.  Given the understandable attention that this issue has received, I have made clear to the intelligence community that unless there is a compelling national security purpose, we will not monitor the communications of heads of state and government of our close friends and allies.  And I’ve instructed my national security team, as well as the intelligence community, to work with foreign counterparts to deepen our coordination and cooperation in ways that rebuild trust going forward.

At the end of Werner's report, the Obama administration went on the record to reinforce their belief that Israel is an ally.

That's not what the Journal found. It's clear from its story — one containing a level of specific detail which would appear to be difficult to refute — that the NSA did not treat Israel and Prime Minister Netanyahu as an ally, but as an enemy of this nation's security:

Privately, Mr. Obama maintained the monitoring of Mr. Netanyahu on the grounds that it served a “compelling national security purpose,” according to current and former U.S. officials. Mr. Obama mentioned the exception in his speech but kept secret the leaders it would apply to.

The "compelling national security purpose" was helping to ensure that the fiasco known as the Iran nuclear "deal" became a perceived reality. Iran reminded us quite recently ("Iran Vows to Speed Up Ballistic-Missile Program") that it doesn't consider the "deal" to be real in any meaningful way.

In a matter getting relatively little play, even among administration critics (and of course ignored by AP's Werner), but probably noticed in nations' capitals around the world, it's also clear that Obama was applying a very narrow definition of "leader" as applied to other countries, based on this paragraph from the Journal's report:

In closed-door debate, the Obama administration weighed which allied leaders belonged on a so-called protected list, shielding them from NSA snooping. French President François Hollande, German Chancellor Angela Merkel and other North Atlantic Treaty Organization leaders made the list, but the administration permitted the NSA to target the leaders’ top advisers, current and former U.S. officials said. Other allies were excluded from the protected list, including Recep Tayyip Erdogan, president of NATO ally Turkey, which allowed the NSA to spy on their communications at the discretion of top officials.

The NSA's spying on Merkel — said to have been personally approved by Obama himself — garnered sensational headlines in late 2013. In regards to Merkel, the Obama administration's actual response, as opposed to the one publicly portrayed, was to say, "Well, we won't spy on her, but we'll spy on everyone around her." I suspect, now that the truth is known, that our German and other allies are quite displeased with this word-games deception.

A companion piece in the Journal on Tuesday indicated that that there have been rules protecting the anonymity of lawmakers’ communications which go back to the Cold War. More recently:

Special safeguards for lawmakers, dubbed the “Gates Rule,” were put in place starting in the 1990s. Robert Gates, who headed the Central Intelligence Agency from 1991 to 1993, and later went on to be President Barack Obama‘s Defense Secretary, required intelligence agencies to notify the leaders of the congressional intelligence committees whenever a lawmaker’s identity was revealed to an executive branch official.

The primary Journal story indicates the White House received the contents of many congressional communications, and that the administration blew off the notification requirement.

That's what's news, AP — not the fact that Congress is investigating it.

Readers should also be reminded that the AP has a vested interest in the perceived success of the Iran "deal" from now until the end of time. That's because it deliberately withheld information from the public about secret negotiations between the Obama administration and Iran for eight months in 2013. After those negotiations became known, AP reporter Julie Pace bragged about how AP had kept them secret for so long. The wire service then tried to deny that it had kept the negotiations a secret at the administration's request. Unfortunately for AP's credibility, another news organization's reporter revealed that "We both had versions of it independently early & were asked to not publish til (the) end of Iran talks."

Because it is related to the Iran "deal" and the secret negotiations the AP did not report at the Obama administration's request which ultimately led to it, the wire service is not an objective source of news in the the NSA-spying-on-Congress story. It has reinforced the truth of that statement in its atrocious treatment of the story thus far.

Exit question: Why hasn't anyone else noted that the NSA's spying during the period also coincided with Netanyahu's reelection campaign in Israel — a campaign during which Obama campaign veterans and apparatchiks actively worked to defeat the incumbent Prime Minister? Was any information shared with people putatively acting outside of administration to advance that fortunately unsuccessful effort?