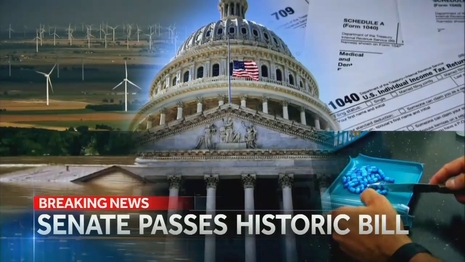 The Senate passing a pared-down climate and health-care spending bill inspired all kinds of aggressive sales language from the network "news" manufacturers. It was sold as huge and tremendously consequential to make Biden look good.

The original bill was dramatically scaled-down for Sen. Joe Manchin, but the networks still sold it as "massive" and "huge." It was a "landmark" and it was "historic." NBC's Kristen Welker touted a “massive economic plan aimed at reducing inflation.” ABC's Maryalice Parks touted "a historic investment in clean energy and climate change, a cap on prescription drug costs for seniors."

Even so, ABC's Jonathan Karl was upset: "he's getting credit for almost nothing, he's on a roll, I mean there’s no question that Joe Biden is on a roll legislatively, on the national security front, but he's getting no credit for it."

At least Chris Christie offered a rebuttal: "They won on the 'Inflation Reduction Act,' which is a ridiculous name, as you pointed out in the interview. But they won on that, they got Democrats to actually vote for a Democrat bill, what are we going to do? Like, drop the confetti at the White House?"