Column: Only Some Terrorist Takedowns Are Unifying and Patriotic 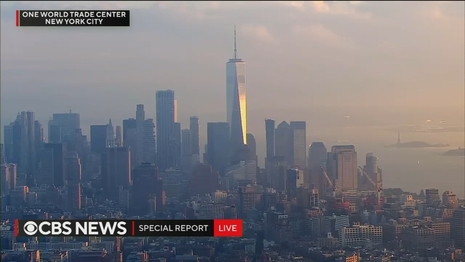 CBS offered a live shot of lower Manhattan. Stelter touted “One World Trade Center in the center of the frame, sparkling in the golden hour of daylight.” Dickerson announced “All those that plotted the attack are either dead or captured. One World Trade stands as the tallest building in the Western Hemisphere. A reminder of the resilience of New York City and the American people." The camera operator pulled back to show the Statue of Liberty in the distance.

Isn’t that a nice patriotic moment for Americans who remember the horror of 9/11? Stelter also promoted this tableau on Twitter.

Then let’s remember that CNN is also projecting that the takedown “hands Biden a political win.” This framing, then, might seem a little like Tom Cruise getting a standing ovation as he hops out of his jet at the end of Top Gun. Or, if you can stomach it, Joy Behar shamelessly cited Biden as resembling action hero Liam Neeson in Taken.

In his August 1 newsletter, Stelter’s headline was a Biden quote: “Justice has been delivered.”

This was not how Stelter responded when President Trump took out Iranian terrorist mastermind Gen. Qasem Soleimani, a man who killed many Americans in Iraq. On January 2, 2020, Stelter’s headline was “War footing” and his first words were these. “Many Americans are swiping their phones on, turning on the TV, and asking what the hell is happening in the Middle East. They are hearing terrifying assessments of the situation and wondering who and what to believe.” 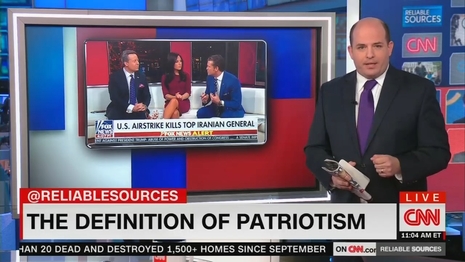 Stelter tweeted out his sermon on the January 5, 2020 program: “Don't be fooled by the propagandists who want us to wear blinders. It is patriotic to ask for evidence. To question official accounts. To wonder if the public is being manipulated into a wider war. It is patriotic to hold our leaders accountable.”

It’s patriotic to celebrate a win for Biden as a win for all of us. But two years ago, it was patriotic to suggest any celebration was equivalent to being fooled by propagandists, and volunteering to wear blinders.

Stelter didn’t sound pro-American at all, because Trump was in charge. “Americans and many others around the world are instinctively suspicious and distrusting of what Iranian leaders say. Well, what about America's leaders? President Trump squandered his credibility at the very start of his presidency, and many officials in his administration have followed him down the path of deceit.” Stelter even backed his argument by quoting Tucker Carlson!

The geopolitical difference here is that Soleimani was part of a terrorist government, and Zawahiri was a non-state terrorist. But it’s obvious that the most important difference for CNN is Democrat and Republican -- especially when it was Trump, who still insists he won in 2020.

Stelter seemed to think everyone should get out the pom-poms. He loved how CBS bathed Biden’s speech in a warm glow, but then sputtered that “Fox goes right back to Biden-bashing.”

New CNN CEO Chris Licht met with Republicans on Capitol Hill recently, campaigning to “win back your trust.” He’s made public noises about tugging CNN away from crusading for liberals and Democrats. But any Republican who still watches CNN with any regularity knows that CNN hasn’t changed. Partisan double standards are still firmly in place.