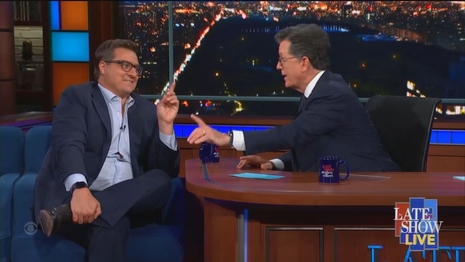 On CBS, The Late Show with Stephen Colbert went live on Thursday, so Colbert could do a live review of the hearings -- like a Talking Dead aftershow -- and express his fascination with the show.

Colbert spent 17 minutes monologuing about it with a pile of hearing clips, and then aired another three segments (adding up to 14 minutes) with leftist MSNBC host Chris Hayes.

The most notable chunk was Colbert and Hayes co-gushing about what a Masterpiece Theater of politics this was. And so wonderfully unanimous! No distracting dissent from the Pelosi Narrative!

COLBERT: You’ve been reporting on politics for 20 years. This is the eighth hearing, ninth hearing tonight?

COLBERT: Eighth hearing tonight? What most has surprised you? Anything surprised you most about the last eight hearings?

HAYES:  Well I think the sheer amount of new information they have uncovered is genuinely remarkable.

COLBERT: : And how they've given it to us.

HAYES:  That is the other – that’'s exactly what I was going to say. It is as a television practitioner, it has been a tour de force of production.

COLBERT:  I think it's going to change how any congressional hearing --

COLBERT: –  is held to a standard because, you know, the circus that usually happens is no longer going to be seen as entertainment. This is actually informative and interesting ( Applause )

HAYES: Yes. And I agree. But the necessary pre-condition for that is you have a unanimity of purpose among the members of the committee across party lines to get to the bottom of what happened and to present their case to the American public. That is usually not the case. If Jim Jordan were up there in his shirt sleeves --

HAYES: – and everything is broken down in majority time, minority time, response, rebuttal, you can't do what they're doing.

COLBERT: I think that's proof Kevin McCarthy does not deserve to be Speaker, because he doesn't understand politics well enough to know what his own game is. (Applause)

The Pelosi-Picked Panel hired former ABC News president James Goldston to make a TV presentation out of these hearings -- and it seems especially produced in prime time. It wasn't a hearing as much as a telling. It was exposition and carefully selected clips. It was....a narrrative.

But there was a disturbing trend of media liberals expressing their joy at the "unity of purpose" in the hearings, undisturbed by conservative Jim Jordans offering any counter-arguments. ABC reporter Terry Moran (spell check on Luria!):

The way Reps. Kinzinger and Lucia work together to present this damning evidence is heartening.

Two veterans, opposed politically on so many issues, cooperating under the Constitution they swore to defend, first in uniform, now in office.

That’s the way America used to be.

I just want to note the Democratic chair of the committee just gracefully, and with full confidence, turned over the running of tonight’s hearing to the vice-chair, who happens to be of another party, and they spoke with mutual trust and respect. That’s how it’s supposed to go.

The Chris Hayes dialogue embracing unanimity was supported in part by.Oral-B and McDonald's