Laura Ingraham: We Were 'Howling' at CNN Story on Angry Democrat Celebrities

On Tuesday's edition of The Ingraham Angle, Fox News host Laura Ingraham read from a CNN article by Edward Isaac-Dovere on how left-wing actress Debra Messing was furious in a Zoom call with the White House that they weren't doing more to save abortion. She put the text on screen and played some music underneath. The knives are out in a story headlined "Democrats wonder whether Biden White House is capable of urgency moment demands."

INGRAHAM: But things didn't get really good until we read the lead of the piece. Dramatic music, please. "Debra Messing was fed up. The former Will and Grace star was among dozens of celebrity Democratic supporters and activists who joined a call with White House aides last Monday to discuss the Supreme Court overturning Roe. The mood was fatalistic.

"Messing said she'd gotten Joe Biden elected and wanted to know why she was being asked to do anything at all, yelling that there didn't even seem to be a point to voting." Ladies and gentlemen, that's your White House and their chief Hollywood activist at work. 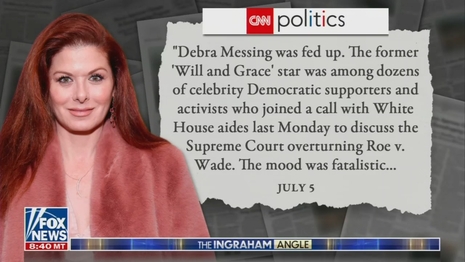 Ingraham turned to Charles Hurt, opinion editor for The Washington Times, and said "when you've lost Debra Messing, you've kind of just gotten to the end. This is the most unbelievable lead. We were howling laughing on our call today. Your reaction to the knives officially being out, Charlie?"

Hurt replied "No, it's pretty remarkable and it's an important marker to remember, especially when the entire administration and the entire Democratic campaign at this point now seems to be, look, we support abortion at any point up to the ninth month and maybe beyond. Whatever. That's their entire campaign because they can't campaign on anything else."

Miller said "It is not a winning platform. It's a platform of destruction. It is a platform for the decimation of the Democratic Party. As long as Republicans pick up and run on the Trump platform of reshoring jobs, bringing our troops back home, sealing our borders, fighting violent crime, and respecting the sanctity of life. You nailed it on the head with that list, Laura. That's what this election is going to come down to."

The outlook doesn't improve when you look at the Democrat bench:

INGRAHAM: And Charlie, The Washington Post reported this a few hours ago, that "More Democrats are frustrated at Biden's caution in what they consider a moment of crisis. Figures like Newsom, Pritzker are showcasing a sharper approach." I don't know what sharper approach they are talking about, but Pritzker and Newsom? The last time I checked, people were fleeing both Illinois and California, or am I missing something?

HURT: No, precisely. And of course, that's exactly what is wrong with the Democratic Party is exactly those ideals that are promoted by Democrats in places like Illinois and California. And that is not a national party. It's just not.

Ingraham's take on Debra Messing getting angry was brought to you in part by Bass Pro Shops.