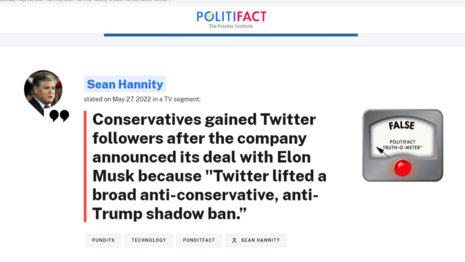 PolitiFact often looks like it's playing word games rather than checking facts. On Monday, Bill McCarthy tagged Fox News star Sean Hannity as "False," but this is how they very selectively quoted a fragment of one sentence:

The subhead was "Sean Hannity falsely credits conservative Twitter follower gains to lifting of ‘shadow ban’." But PolitiFact left out some crucial words at the top, even as they accurately quoted it later in the piece: 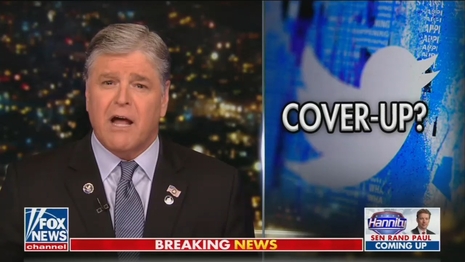 "It's almost as if Twitter employees lifted a broad anti-conservative, anti-Trump shadow ban, which we all knew was taking place anyway, in an effort to cover their tracks before the new boss takes over," Hannity said in the April 27 segment. "Now, Twitter claims that there's nothing nefarious at play here, but they've said that all before." (Emphasis mine.)

In fact, at the top of the article PolitiFact claims Hannity's fib was on a "May 27, 2022 TV segment," which was off by a month.

Bryan White (or @ZebraFactCheck) noted the word games on Twitter. This was his thread:

"It's almost as if" serves as a common hedge in English. It's most often used as a way of floating a working hypothesis and not as a way of saying whatever follows is a fact. What fact checker can't figure that out? PolitiFact, that's who.

It's also worth noting that PolitiFact's headline version of the Hannity quotation omits "employees" without using an ellipsis to clue readers to the omission. What's the justification? Incompetence?

Then at the article's conclusion, McCarthy goes back to curtailing the quote as it appeared at the top:

The New York Post reported some major conservative accounts experienced massive gains in followers last week. Donald Trump Jr. was up over 200,000 -- that was Hannity's point right before the "It's almost if" line. Ron DeSantis was up over 200,000, and Tucker Carlson was up over 140,000. You're apparently not allowed to guess why that happened.

Some part of this could merely suggest that discouraged conservatives who were inactive on Twitter after the suppression of the Hunter Biden laptop and the January 6 riot reactivated their Twitter accounts. Mark Levin signed back up after Musk bought the company. But as usual, conservatives aren't allowed to float guesses about what is happening at Twitter behind the scenes.