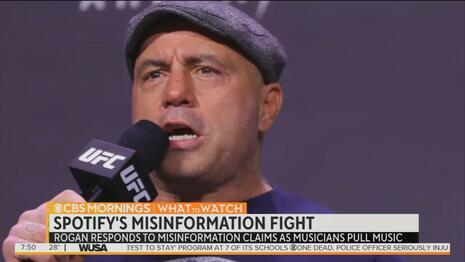 The pro-Biden media claim to be for “free speech” while they play up left-wing protests demonizing Spotify for airing Joe Rogan’s podcast. Seventies musicians Joni Mitchell and Nils Lofgren joined Neil Young in pulling their music from the streaming service...but it's not about free speech, they say.

Speaking of silly claims, CNN's Brian Stelter did a segment on his Sunday show that there’s too much division and conflict in society -- as if CNN hasn't been dividing the country in their hateful Trump obsession? This sudden distaste for conflict arrives just as Biden nominates a black woman for the Supreme Court...apparently everyone should sing Kumbaya and vote Yes.