The Washington Post touts itself as the activists who live by the maxim Democracy Dies in Darkness. But in reality, when it comes to issue like climate change, the Left doesn’t trust Democracy to get anything accomplished. The literal poster child for this view is teenaged radical Greta Thunberg, honored on the cover of Sunday’s Washington Post Magazine. 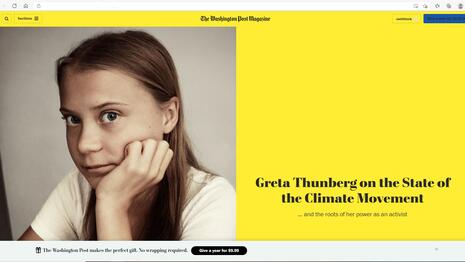 The cover headline for this K.K. Ottesen interview was:

Great Thunberg on the State of the Climate Movement

…and the roots of her power as an activist

The “roots of her power” are obviously the global elite, starting with the media elite. Her appeal has always been an alleged "truth-telling" moral authority as a child whose future would be ruined by polluters, not as any kind of scientist. But inside the magazine, the headline was:

"WE CANNOT COMPROMISE WITH THE LAWS OF PHYSICS"

Almost every question from the Post interviewer was a sappy softball, but this one is the most annoying:

Do you think one of the reasons you were so effective right away was because it was a shock to hear this small, young girl speaking uncomfortable truth to adults who were supposedly the experts?

Liberals always presume that their weather forecasts are the "uncomfortable truth." The key to Greta is that everyone else isn't radical enough. The last UN summit was a "PR event," Joe Biden is not a "leader" because "The U.S. is actually expanding fossil fuel infrastructure." This is her appeal to the media, to goad toward a more radical position. This is the "toughest" question:

There are clearly people interested in climate change who take a more diplomatic tack, aware that they have to compromise to get things done. Do you ever worry that the “blah, blah, blah,” or more combative rhetoric, makes their job harder when they’re trying to do the right thing, just from a more temperate position?

The overwhelming sense of the interview is extreme sympathy, touting Thunberg like her life is so difficult, being a hero:

You have become a hero to young people, yet you were bullied as a kid and socially isolated. It must be sort of complicated now that young people who previously didn’t support you or give you the time of day are putting you on a pedestal.

....What can you tell other young people, both those experiencing bullying and maybe those doing the bullying, to help them move to a better place?

....Do you draw a connection between empathy for each other on a small level and empathy as a global community with climate change and climate justice?

The final question was the scariest, but it's definitely on the minds of anti-democratic climate radicals who want climate lockdowns. "What can we learn from the pandemic about what can be accomplished when people do, in fact, treat a crisis like a crisis?"