WashPost Media Columnist: We Haven't Obsessed Over 1/6 or Trump Enough 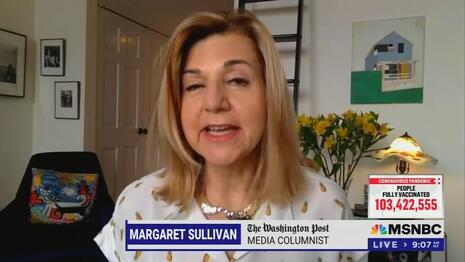 The idea of objectivity or balance or fairness in reporting has taken a beating since Donald Trump arrived in national politics. What’s dominant today is the media elite constantly encouraging each other that their product is never activist enough.

Washington Post media columnist Margaret Sullivan was thumping the tub with a new vigor on Monday under the headline “If American democracy is going to survive, the media must make this crucial shift.” The crucial shift? More activism. More overt grabbing readers and viewers by the lapels and scaring them. "Shout it from the rooftops," she insisted.

"That American democracy is teetering is unquestionable. Jan. 6 is every day now, in the words of a recent New York Times editorial," she said. So the media isn't obsessing over Trump and 1/6? Really? Sullivan had to admit: "To be sure, even some of the most studiously neutral of news organizations are doing important journalism on this subject."

-- A badly disguised AP "news" report/editorial on the GOP's "slow-motion insurrection". This was hyped all over cable "news."

-- NPR's Morning Edition presented a seven-minute report on “the clear and present danger of Trump’s enduring ‘Big Lie.’ ”  She quoted professor Jay Rosen admiring there was "no dilution via 'both sides.'"

-- Chuck Todd — "who has deservedly drawn criticism in recent months for too often allowing GOP talking points to go unchallenged" — stepped up in a significant way to detail the “big lie” spread by Trump allies this past year to evoke the specter of a supposedly stolen presidential election.

-- The Atlantic magazine -- "which positions itself as centrist rather than left-leaning" --.  predicting "January 6 was practice." This feature was also promoted all over liberal cable "news."

If you believe any of these outlets are "studiously neutral" or "centrist," you probably think Bernie Sanders is a squish. Sullivan claims to be "reality-based," but she flunks in categorizing media outlets.

Biden is president, but all of these outlets are still obsessing over Trump, 24/7. The idea of holding the current Democratic powers in Washington accountable is not "democracy." Constantly decrying the Trump Menace defines "democracy."

But, in general, this pro-democracy coverage is not being “centered” by the media writ large. It’s occasional, not regular; it doesn’t appear to be part of an overall editorial plan that fully recognizes just how much trouble we’re in.

That must change. It’s not merely that there needs to be more of this work. It also needs to be different. For example, it should include a new emphasis on those who are fighting to preserve voting rights and defend democratic norms.

This new pro-democracy emphasis should be articulated clearly — and fearlessly — to readers and viewers. That could be in statements from editors or publishers, in advertising campaigns, or in other ways, declaring, in essence, “we are devoting more resources to this crucial subject because it is at the heart of our mission.”

You know, like putting "Democracy Dying in Darkness" on the front of the paper and selling T-shirts, onesies, and water bottles with your slogan. That's not been done?

The overwhelming irony in Sullivan (and Jay Rosen et al) pushing for "centering democracy" is that they delight in one-sided activism. They delight in crushing this damaging idea of "both sides" reporting, as if....democracy has two sides.