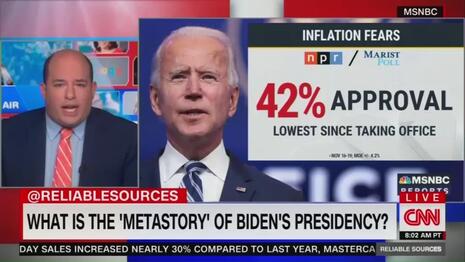 On the latest NewsBusters Podcast, we reflect on the amazing lack of self-awareness demonstrated by CNN Reliable Sources host Brian Stelter as he led off his show Sunday with a commentary suggesting that other news outlets were partisan, and disparaged the president based on "feelings over facts."

Stelter thinks it's counter-factual to blame Biden for anything that's going wrong, from new COVID variants to inflation. How dare anyone find a "crisis," or worse yet "crises" under Biden!

We also explore the strange social-media output of liberal media outlets -- including CNN and The Washington Post -- who were ratioed on Twitter for suggesting that six people in Waukesha, Wisconsin were apparently murdered by a driverless "car" or "SUV." Some news outlets downplayed the rampage into a "crash" or an "accident," when it wasn't some kind of unintentional act. They're not focusing on Darrell Brooks, who also recently ran over the mother of his child with his car. Earlier, he fired a gun at his nephew.