The serious answer is that Maher is a contrarian who tends to lean into whoever's in power. As a million-dollar donor to Barack Obama, he sounds alert to what makes the Democrats lose, the "woke" takes. So he's more like James Carville than Gutfeld. But this exploration is fun:

GUTFELD: Let's take a look at the evidence, shall we? First up, let's hear Bill's thoughts on agenda driven media coverage of Hunter Biden.

BILL MAHER on CNN: Something like Hunter Biden. I mean, if Don, Jr. had done what Hunter Biden had done, it would be every night, all night on MSNBC. But the fact that it's Hunter Biden, and Joe is on the blue team -- see, that's the problem with America, everything is so binary.

GUTFELD: So, where have we heard that before?

GUTFELD clip from June: Imagine if this were Trump's offspring? I know, that's a cliched question at this point. But I mean, it has to run through your head like that like, this -- I mean, what your family went through every day, because you're simply related to the President, and then compare it to what he's not going through.

GUTFELD: I was less eloquent. All right. Clearly, and what about critical race theory, Bill? Let me guess. It's not a phantom. 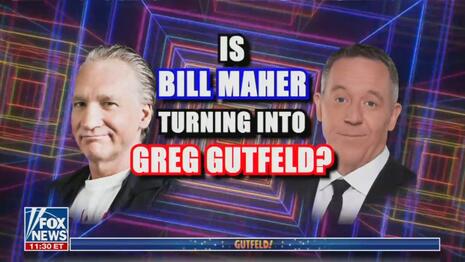 MAHER on CNN: And it's not a phantom, either. There's something going on in the schools that never went on before. Now, I'm not in schools. I have no interaction with children whatsoever. But I do understand this issue because I read accounts from parents, from educators, kids are taught and sometimes separated into groups oppressor and oppressed.

GUTFELD: And what say you, Mr. Gutfeld?

Gutfeld said “I rest my case” to applause.

He wasn’t trying to suggest that Maher was plagiarizing him or acting badly. “I'm not trying to call him out on anything. This to me makes me feel good, and also, I realize that no matter what I say, I'm not reaching his audience. But he can actually take -- he can take whatever he wants from this show. Whatever he wants. And if he talks to his audience, I love him for that, because he's reaching people we can't.”

The Gutfeld show was brought to you by Arby's and Cadillac.