Capehart on PBS: If Democrats Lose in Virginia, 'Fear Works' and 'Whiteness Is a Hell of a Drug' 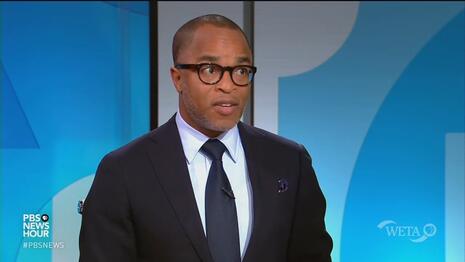 On Friday's PBS NewsHour, they lamented the close race for governor in Virginia in their weekly roundup, and Washington Post columnist and MSNBC host Jonathan Capehart spat out that "white grievance" was to blame, and "whiteness is a hell of a drug."

Anchor Amna Nawaz sounded like AP, that "Democrats haven't a lost statewide race since 2009 in the commonwealth. Why is it as tight as it is?" She played a soundbite of Barack Obama touting Democrat Terry McAuliffe, but left out the part where he implied that concerns over two sexual assaults by a teen boy in northern Virginia high schools are a "fake outrage" and a "trumped-up culture war."

Nawaz then went after the Republican: "Glenn Youngkin, meanwhile, has been campaigning with officials who've repeated the lie of mass election fraud." When was that? The only guest Youngkin's campaign has touted in the last week is country singer John Rich, who sang for the candidate in Blacksburg.

She added the unproven claim "He's been leveraging parental anger over Critical Race Theory, which is not being taught in schools." She didn't mention the Youngkin campaign having a call for the press of black leaders who are upset over McAuliffe's criticism of parents, or Youngkin's campaign touting how black former Governor Doug Wilder praised his commitment to funding historically black colleges. But this was nothing compared to NewsHour panelist Jonathan Capehart's view of what happens if Democrats lose:

CAPEHART: It would show that fear and anger win the day. The fact that we're having a conversation about Critical Race Theory that is not taught in public schools in Virginia, it just goes to show how Republicans have decided that picking at white grievance and tap-dancing with white supremacy is their way back into power.

And if Glenn Youngkin wins, yeah, the Democrats should be afraid, because fear works. And I like to say, whiteness is a hell of a drug. And going into the midterm elections, we will see just how successful it can be.

At least his fellow panelist, New York Times columnist David Brooks, mentioned there was sexual assault in the mix: "I think the swing in the last week can only be the culture issues, the school board issues. There's a case of — it's more complicated than Republicans are making it out to seem, but sexual assault in a girl's bathroom with a fluid-gender guy as the — as the alleged perpetrator. And so that's suddenly turned into a big thing."

He said the question is are "schools imposing values that we don't agree with on us and imposing them on our kids? And that has made a lot of people angry. And I think that's the issue of the last week that has really seized people. And how the Democrats let themselves get on the wrong side of that issue is a bit of a mystery to me. It's a no-brainer that people have very diverse views on gender and all this stuff."

PBS NewsHour is brought to you by...you, and your tax dollars. And by Johnson & Johnson.