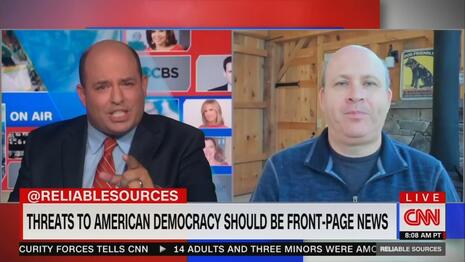 How deeply in the Democratic tank is CNN host Brian Stelter? The tinny echoes were overwhelming on Sunday's Reliable Sources as he committed a softball interview with Democrat election lawyer Marc Elias, a central figure in the false Russian-collusion scam and Steele-Dossier mess.

Stelter asked him nothing about that, because that would make CNN look like the Elias-enablers that they were. Instead, he shamelessly painted Elias as the "truth" side of the Trump fight. Here's how he introduced Elias: "But, first, a media critique from a former Democratic voting rights attorney. That's Marc Elias. He's the founding partner of Democracy Docket. And he wrote this week about how peddling these lies can topple democracy."

1. "You've been critical of CNN at times. You were critical of this show last week. So, I want to hear your number one critique is of how the news media is or is not covering threats to democracy."

2. "What should we do differently in concrete ways? It feels like every day there's a slow, gathering storm. We see this democratic backside happening. What should the nightly news and the newspapers and the AP and the Reuters do on a daily basis differently?"

3. "There's a new book out by Mollie Hemingway. She's a Fox News contributor. It's called Rigged. It's supposed to be the intellectual argument for how the election was stolen, you know, through Big Tech and through the media putting its thumb on the scale, et cetera. And Hemingway has been all over Fox in the past week and she has been calling you out among others because you are viewed as this Democratic lawyer boogieman who is out to, you know, in their minds, steal elections. So, how do you handle that, you know, intense scrutiny, that coverage, that criticism from right-wing media?"

Elias said he takes on the right-wingers, and told Stelter "your show does extremely well and, frankly, I wish all of the media did what your show does, is you don't ignore the right wing misinformation just from -- you take it head on," which led to...

4. "Yeah, I appreciate what you said about this program and about, you know, some people are trying to call attention to this every day, every week. I think CNN every day is sounding these alarms. And one of my fears is that other networks, other major outlets are not, and they're going to regret it years from now, right? Isn't this ultimately about -- let's not have regret 20 years from now?"

Stelter ought to regret how wrong CNN was on the entire Russian-collusion scenario. But he sounded like he would only regret getting out of step with Marc Elias and the Democrat strategists.

The most cringeworthy part of the Elias/Stelter interview was him praising “Reliable Sources” and saying he wished “all of the media” did what Stelter did in attacking “right-wing misinformation.”

Stelter later thanked him, saying, “I appreciate what you said about this program”

This Democratic mutual admiration society was brought to you in part by Verizon.