David Rutz at Fox News reports that Brian Stelter made an appearance at a college class at Lehigh University, and lapsed into defending the thunderbolt-throwing editorializing on channels like CNN, hilariously arguing that it's not partisan to be anti-Trump and "pro-democracy, pro-decency, pro-truth."

Why Lehigh? The professor was Joan Lunden, who co-hosted Good Morning America on ABC for many years. He was touted as such a "dynamic expert!"

...about the responsibility of the media and how the infusion of politics into public health has made it challenging. I love seeing how these students are beginning to engage with such dynamic experts!@lehighu @cnn @brianstelter @cnnreliable pic.twitter.com/hUBoEs4pNq

Presumably, these two mourned that somehow Trump -- and not the media -- "infused" politics into public health.

Lunden set Stelter up to defend "attacks" on the free press:

"Now that there are all these attacks on free press, and quite honestly attacks many times on the actual truth, have you had to change your stance in that now you kind of need to take a stance, and give an opinion? … That maybe three, four years ago, you would have said, ‘I’m not going there,'" Lunden said.

Stelter acknowledged there had been anchors occasionally uncorking opinions before 2015, but "What you see a lot more of since 2015 are these analysis segments, these perspective segments where we are looking straight into the camera, we're talking directly to the viewer, and we are assessing the information out there, trying to tell you what we see is true, what we know to be true, and now also sometimes what we stand for."

Often, Stelter attempts to deny there's a pile of opinion on liberal news shows, but when he admits it, it always comes with a large plate of Necessity: 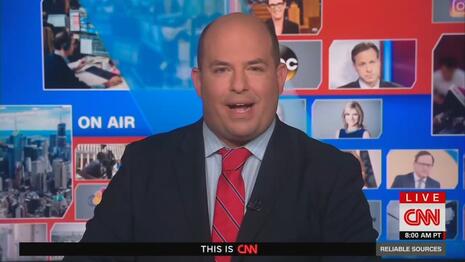 "When you've got a propagandist, a demagogue running for president, then becoming president, and taking pretty clear anti-democracy positions, I think the idea was understandable that anchors … talked about democracy, talked about truth, talked about decency," Stelter said. "I don't think it's partisan to be pro-democracy, pro-decency, pro-truth.

"I do think there are topics that are essential to America and journalism that must be defended, and I think that's how CNN's evolved where you have anchors like Anderson [Cooper] or Jake Tapper or in my little way, myself, who do take those stands."

He concluded "We have two medias. We have two countries, two medias...,We have a mainstream media, you know all the brands. We're flawed but we're trying. And we have this alternative media structure in the country … We have these two medias in one, and it creates a very, I think, confusing environment for the public."

CNN finds it "confusing" that there's an "alternative media structure." They wish it didn't exist to "confuse" people with a conservative counterpoint. It's somehow "pro-democracy" to wish away your opposition.