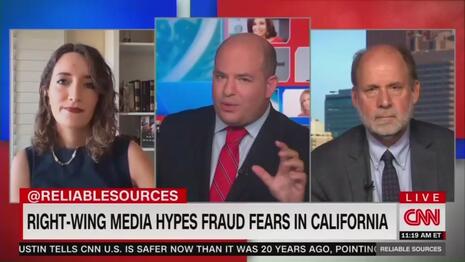 In July, she compared Elder to neo-Nazi David Duke:

White grievance politics were once the purview of neo-Nazis and the Ku Klux Klan, as when David Duke claimed “the white man” was the real “second class citizen in America today.” Now, thanks in no small part to Elder and his protégés, the delusion of rampant reverse racism is mainstream in Republican politics and Fox News.

Stelter never asks Guerrero to explain herself on this bizarre comparison. But then, Stelter doesn't push back when his guests suggest Donald Trump will kill more people than Hitler, Stalin, and Mao combined.

STELTER: You have been an outspoken critic to Elder. He has been a right wing radio host for decades. But then he sparred with the media that's been covering the campaign. He's still the leading contending among the Republicans in this recall. So, do you think he was able to get around the media and reach voters in California? Was he able to run a Trump playbook in the state.

GUERRERO: I mean, kind of. He's essentially been running his campaign on Fox News and right wing media outlets. He refused to talk to nonpartisan media outlets [like the LA Times!?] and journalists who are critical of him, has refused to answer media questions, uses the time he has on social media to denounce those journalists and playing the victim.

But he has been able to reach the minority of voters in California who embrace his white supremacist world view. He co-opted this line by my fellow columnist in from the headlines, calling him the black face of white supremacy.

But he refuses to engage with the actual substance of our reporting, you know, the idea that his views were shaped by a well-known white supremacist, a man named Jared Taylor, who we quoted in early writings, that he plans to reverse all the state's progress on immigrant rights and racial justice. And that he poses a real threat to communities of color for all the reasons that we have reported in the past.

STELTER: Clearly, The L.A. Times opinion folks, you and others, have been very much against Elder. We will see what impact if any that has had in two days. I like the word you used about Elder and the media, his performance. He performs his anti-media pose when he's on Fox and elsewhere. That's what we hear from the former president as well.

Stelter also put on left-wing columnist Will Bunch, because the show is Reliably Liberal. Stelter also ignored the "hate crime" where a white woman wearing a gorilla mask threw an egg at Elder's head.