Barr began with a snippet of MSNBC host Andrea Mitchell welcoming on H.R. McMaster as an expert on August 26. Barr made no mention of Mitchell pressing McMaster about Trump's dealings with the Taliban in 2020, that "they cut Afghanistan's government out of the whole negotiation. So wasn't that the original sin?" Barr and his "heat" team are just mad McMaster was booked. 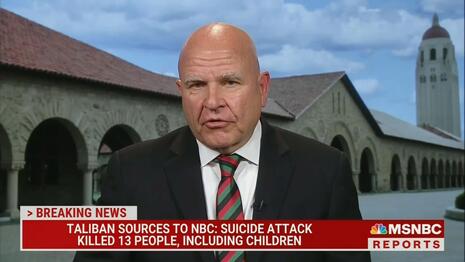 A convoy of military experts have been invited onto cable TV shows to critique the calamitous end of the Afghanistan War, notwithstanding the central roles many of them played in the 20-year conflict, which was supposed to result in a democratic Afghan government that could withstand Taliban attacks. That has not sat well with some viewers — and even fellow TV hosts, like O’Donnell — who argue that some of these former leaders are eliding their own role in the failure of that mission and are unfairly criticizing the Biden administration for abiding by a withdrawal that was negotiated under Trump. Critics also argue that these viewpoints have taken airtime away from humanitarians, longtime opponents of the war and advocates who could speak to the human toll of the U.S. presence in Afghanistan.

Lucas Kunce, a Marine veteran who served in Afghanistan and is running as a Democrat for a U.S. Senate seat in Missouri, went viral this week for appearances on MSNBC calling out television pundits who he claims want the United States to stay in Afghanistan in perpetuity.

The Post claims that the multiple appearances of these experts have drawn “an outcry” because most of them played a role in formulating U.S. policy in Afghanistan and have been wrong in some of their assessments....

But Anthony Fauci has been wrong on occasion about the coronavirus pandemic and has been the lead health expert in two administrations during which the pandemic raged (U.S. deaths per day from the pandemic at present are slightly higher than they were at this time last year). By the Post’s reasoning, Anthony Fauci should be barred for life from appearing on cable news to discuss covid issues (or anything else) unless he first confesses during the interview to his errors and failures.

To be fair to Fauci, the coronavirus pandemic is novel. Any official would have made erroneous calls.

But the war on terror is also novel. So there is no shame in having a less than perfect record in matters relating to its prosecution.

...Barr’s real beef is with giving air time to critics of Biden administration foreign and national security policy, or at least those who criticize it from the right. This is consistent with the Post’s broader desire to silence conservatives on television. The Post’s Margaret Sullivan wants to destroy Fox News.