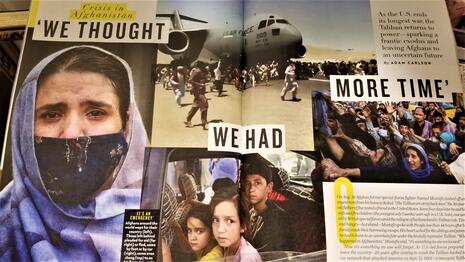 The cover of the September 6 issue of People magazine is all about actor Val Kilmer and his “harrowing cancer battle.” But there in the table of contents was this surprise on page 50: “Crisis in Afghanistan: Veterans and refugees reflect on the end of America’s longest war.”

There was no reflection or judgment of Biden's role in this debacle. This part was amazing: in five pages of text and pictures, Biden only shows up in a lame pull quote on the third page:

Then there's this vague mention on the fifth page, in a caption:

After a clumsy start, the White House said on Aug. 23 that U.S. military evacuations carried some 48,000 people to safety in August – adding thousands more each day. “This was a personal operation to us,” said Chief Master Sergeant of the Air Force JoAnne S. Bass.

The headline of the big spread was:

‘WE THOUGHT WE HAD MORE TIME’

As the U.S. ends its longest war, the Taliban returns to power – sparking a frantic exodus and leaving Afghans to an uncertain future

Carlson described the scene: "As U.S.-led forces prepared to leave the country -- 20 years after coming to crush the Taliban-backed terror network that attacked America on September 11, 2001 -- a resurgent Taliban took control in a lightning quick offensive that met little resistance from the Afghan army or government. President Ashraf Ghani fled the country. The world watched the horrifying chaos play out on the streets of the capital city, with thousands of Afghans allied with the west rushing the  airport tarmac, desperate to board outgoing planes."

Most of the article is a series of reflections by Afghans and veterans of war in Afghanistan. One vet called it "vicarious trauma, and it can be extremely triggering to veterans." But absolutely no one evaluated Biden's performance in office.

On the third page were reflections by former First Lady Laura Bush and actress Angelina Jolie. Mrs. Bush said "In the midst of unspeakable tragedy, we must resolve to never look away."

But People energetically looked away from Biden!