Capehart on PBS: Pelosi Is a 'Devout Catholic' and Lover of the Constitution

CAPEHART: Well, I do think we will learn a lot. But the key thing that everyone one should keep in mind is that, for Speaker Nancy Pelosi, who is a deeply faithful person, devout Catholic, her love of the Constitution ranks up there as number two in terms of her — what she strongly believes in.

And for her, as a member of Congress representing a district in California, as a constitutional officer, as speaker of the House, for her, her allegiance an oath to the Constitution is inviolable. And the fact that people stormed the Capitol on a really sacred, sacred day and sacred process for American democracy, certifying the election, it was an affront to her as an American and an affront to her as the speaker of the House. 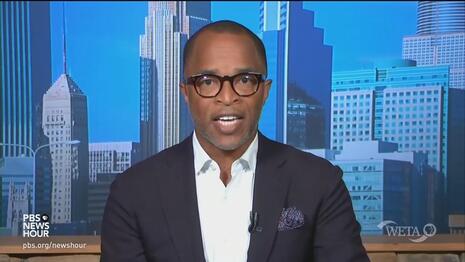 It was an important process, but now it's partisan. The party-line vote proves it. Capehart insisted "anyone who thinks that this is only a partisan exercise doesn't really understand who she is and why she is doing it." The liberals are always idealists first and partisans somewhere down the list!

BROOKS: Liz Cheney has a really tough person. To go against her own leader and to accept this appointment from Nancy Pelosi, that shows she's just very tough. And she has decided that her — it's her oath to defend the Constitution, to look into that what happened on January 6. And more power to her.

As to what the Republican leader, Kevin McCarthy, does, I'm intrigued. Does he go — I assume he will staff his side of the committee, because, otherwise, the Republicans will be silenced. Does he go and get super hard-charging, fire-breathing right-wingers who will make Fox happy and sort of disrupt the whole works -- what Elise Stefanik has become -- or does he go with people who actually voted to certify the Biden election? I imagine he will go with the hard-chargers, and we will get something of a political theater.