Democrats Often Win a Grammy, Now They Lust for an Emmy for Their 2020 Convention

In Sunday's Arts & Style section, Washington Post drama critic Peter Marks wrote what sounds like an endorsement, an article headlined "The 2020 Democratic National Convention won with viewers. Now its organizers hope to win an Emmy." Inside the Democrat bubble, it was all smiles: 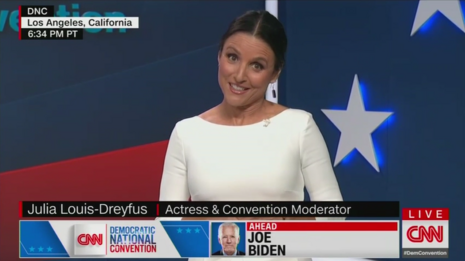 Widely praised for its seamless pacing, technological mastery and thematic discipline — not to mention the Rhode Island delegation’s memorable calamari moment — the convention rewrote the rules for using mass media to galvanize voters and invigorate a campaign.

And now, some of its key operatives are seeking another endorsement: not from their partisan peers, but from the Academy of Television Arts and Sciences. Yes, organizers of the digital convention are improvising again, going after another brand of nomination — from the Emmy Awards, the coveted TV trophies that will be handed out this year on Sept. 19.

Democrats are aiming for two Emmy awards: one for the convention, as outstanding hosted nonfiction series or special, and one for the inauguration night show hosted by Tom Hanks, Celebrating America, as outstanding live variety special. Democratic operative Stephanie Cutter humbly suggested "we're a long shot," but would this kind of Democrat-to-Democrat polish really be surprising?

Back then, he began:

For your Emmy consideration: The Democratic National Convention.

Seriously, Wednesday night was far and away the best full evening of political television I have ever witnessed. What elevated it was the sublime integration of image and language, conviction and emotion: a production that knew exactly what story it wanted to tell and how to use the tools of electronic persuasion to tell it....

The funniest part was Marks insisting the show was so compelling "MSNBC, for one, let the program run entirely without pundit interruption." That wasn't an artistic decision! That was a supine political decision.

Naturally, Marks insisted only the Democrats deserved an award: "The Republican National Convention, telecast a week later, was an inferior facsimile and attracted fewer viewers, according to Nielsen’s TV ratings; it’s far-fetched in any event to contemplate a major arts academy giving a nod to any sort of Trumpfest."