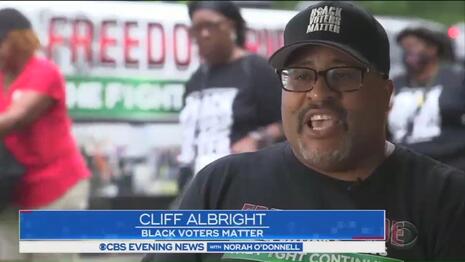 On Tuesday night, the network anchors on ABC, CBS, and NBC warmly eulogized the Democrat "election reform" bill, and ripped Republicans for their "tough voting restrictions." They're never going to sound happy when their team loses a vote.

CBS in particular touted the Democrat effort to "greatly expand voter rights." They found Cliff Albright of Black Voters Matter to uncork the outrageous claim that Republicans are like segregationists: "It's Jim Crow 2.0. It's the same impact and the same patterns and that's why we're fighting it." The Democrats were the originators of Jim Crow 1.0.

The guest is kept in the family: podcast producer Ben Graham of MRCTV discusses taking a camera to interview people outside the raucous school board meeting in Loudoun County, Virginia over schools teaching transgender orthodoxy and critical race theory.