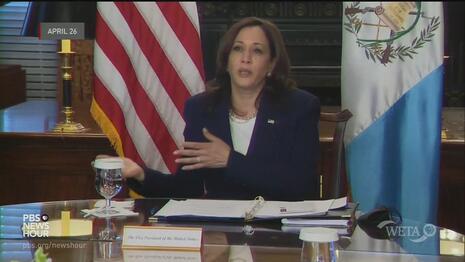 On the latest NewsBusters Podcast, we explore just how Biden's border crisis is actually getting worse, and yet, the network news coverage of that subject fell dramatically last month. Our look at ABC, CBS, and NBC evening news coverage shows border coverage dropped 61 percent in April, even as the number of "border encounters" increased. These networks are working overtime to soften and spin away the surge of illegal immigrants, including unaccompanied minors. Vice President Harris was put in charge, and the networks mostly ignored that she wasn't really doing anything.

As the Senate Rules Committee debated amendments to the "For the People Act" federalizing elections, these networks aired nothing on Tuesday night -- perhaps because the bill is stuck in a 9-9 tie. We can't have Democrats looking ineffective. Joy Reid somehow compared Ted Cruz to a vicious Uncle Tom character in the movie Django Unchained, while NPR's All Things Considered only considered the anti-Trump spin of the top Democrat hack lawyer working for Hillary Clinton for president.

Kyle Drennen joins in the conversation to discuss the media's sudden adoration of Liz Cheney, who can't stop talking about the last president for failing to accept he lost. Then we discuss the media's love for a Democrat who never really admitted she lost, Stacey Abrams. We wrap up with the new Republican nominee for governor of Virginia, businessman Glenn Youngkin, and how Chuck Todd went on MSNBC and regurgitated the Democrat spin of former Gov. Terry McAuliffe. Could Chuck be helping out his wife Kristian, the Democratic strategist? Tune in for more.