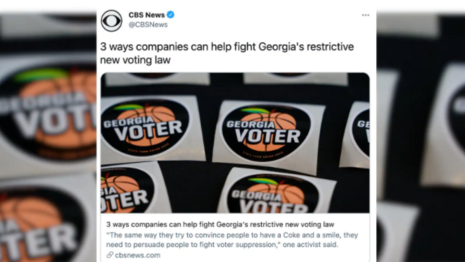 Conservatives on Twitter mocked the tweet. "I missed the announcement that CBS is now a Democratic SuperPAC," RealClearInvestigations senior writer Mark Hemingway quipped.

On Saturday, not only did CBS News delete the tweet, but it also reframed the report to downplay its advocacy.

The headline was changed to "Activists are calling on big companies to challenge new voting laws. Here's what they're asking for." They added no editor's note explaining the change.

The framework of the Brooks article remained. The three ways companies were urged to fight the Georgia election law was:

2. Spread awareness of the Georgia law to other states – which the media are doing aggressively. "Major advertising campaigns have helped these companies individually, but ads can also help stamp out efforts nationwide to pass voting laws similar to Georgia's, activists said."

3 Fight for federal law -- in this case, support H.R. 1, the federal law supported by Democrats to submit the states to federal supervision of election rules. Companies "need to work aggressively to call for the passage" of the For the People Act, leftist Nse Ufot said.

That's not the only story Fox has on CBS. Wulfsohn also reported CBS is being accused of deceptively editing a heated exchange between Gov. Ron DeSantis (R.-Fla.) and correspondent Sharyn Alfonsi accusing him of a "pay for play" scheme in a promotional tweet for 60 Minutes. Alfonsi noted the major supermarket chain Publix had donated, and were given the opportunity to administer vaccines.

"The criticism here is that is pay for play, governor," Alfonsi told DeSantis.

"And it's wrong, it's wrong," DeSantis shot back. "It's a fake narrative. I just disabused you of the narrative. And you don't care about the facts. Because, obviously, I laid it out for you in a way that is irrefutable."

Under Biden, CBS's reporters aren't challenging President Biden or his press aide Jen Psaki like this!

This was also challenged on Twitter from the right:

Wow. And it appears that @60Minutes edited the clip to cut out several minutes of @GovRonDeSantis giving extensive details showing just how wrong this narrative is..

It would not be surprising at all that 60 Minutes created a phony scandal through malicious editing. It's more of a feature than a bug. It's where Dan Rather (on 60 Minutes II) uncorked his phony National Guard documents in an attempt to ruin President George W. Bush.