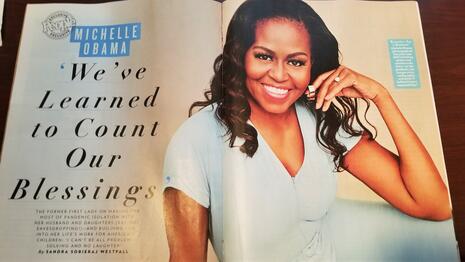 Just five weeks after their latest puffball cover story on Joe and Jill Biden, People magazine offers a cover story on Michelle Obama. The cover announced the theme: "Love, Family & What I Know Now: The former First Lady on keeping life fun, parenting grown daughters, and how marriage was shaken but stayed strong: 'I look across the room and I still see my friend'."

"We've learned to count our blessings" is the big takeaway inside, and "making the most of pandemic isolation with her husband and daughters (Baking! Eavesdropping!)"

But why now? What is she selling? The excuse for another six-page spread of sugar is a new “young readers edition” of her 2018 memoir Becoming. (They're counting their royalties, not just their blessings.)

When People first met Michelle Obama, in June 2007 she was unapologetic about the fact that she hated politics and prioritized being a mom. “This is who I am,” she said plainly.

This was the Obama campaign spin at that time, that Michelle was a mama bear first, not that "lawyer spouse" pushing her husband to run for president. Liberal journalists also rushed to “correct” the idea she was slamming their opponent Hillary Clinton when she would repeatedly proclaim "And my view is that if you can't run your own house, you certainly can't run the White House."

Westfall came with all the usual softballs. The first one was promoting Mrs. Obama's Netflix series for children, telling them to eat their vegetables: "If you were going to star in a Netflix series, why Waffles + Mochi and not, say, Bridgerton?" That's the Shonda Rhimes multi-racial bodice-ripper.

The former First Lady replied "First of all, I'm not an actress, so Waffles + Mochi is an easier lift for me because I'm being myself...Whereas Bridgerton, the love scenes -- I don't know. I'd pass. [Laughs.]"

From there, it was talking about how her daughters baked during the pandemic, which led to the usual Barack tribute: "I know your husband loves a good piecrust, but when we interviewed him in November, there wasn't an ounce of body fat on him." Michelle finished the spin: "He's just ridiculously disciplined. We hate him. [Laughs.]"

There was also the knitting inquiry: "You taught yourself to knit last year. Have you mastered it?" They also plugged Michelle's podcast, since this is all about the PR.

Near the end came the politics:

You were very vocal in the 2020 election. Can you breathe now?

We breathe for a moment, but there's still work to be done. That's why Barack and I are focused on developing the next generation of leaders through the Obama Foundation [another plug!]...so that each year we step further out of the spotlight and make way for them.

There's nothing that says "stepping out of the spotlight" like a splashy cover story in People. Then came more treacle:

Will you ever do something just for fun?

I come from a working-class family, and who I am is that community. I can't just go off and do fun things and feel good about it if I'm not making a difference...

Now who is buying the Obamas as "working class" folks now? After more than $100 million in book deals and Netflix deals and speaking fees, and so on, and so on? But People will still publish this syrup in all seriousness.