Trump defense lawyer Michael van der Veen appeared on CBSN after the impeachment trial ended on Saturday, and launched into anchor Lana Zak over her implication that his charges of House Democrats doctoring evidence were trivial. It belongs on an all-time list of media smackdowns.

Zak started the interview with a typical CBS approach, drawing the lawyer's attention to Senate GOP leader Mitch McConnell's dressing down of the former president as being responsible for the "insurrection." Then Zak tried to claim that he had denied there was an "insurrection," and then admitted there was.

VAN DER VEEN: What happened at the Capitol on January 6th is absolutely horrific, but what happened at the Capitol during this trial was not too far away from that. The prosecutors in this case doctored evidence. They did not investigate this case, and when they had to come to the court, or the Senate, to put their case on, because they hadn’t done any investigation, they doctored evidence. It was absolutely shocking….

Zak then attempted to summarize, but made it sound like it was tiny faking around the edges:

ZAK: To be clear for our viewers, what you’re talking about now is a checkmark that’s a verification on Twitter that did not exist on that particular tweet, a 2020 that should have actually read 2021, and the selective editing, you say, of the tapes. Is that how — is that the doctored evidence of what you’re speaking? 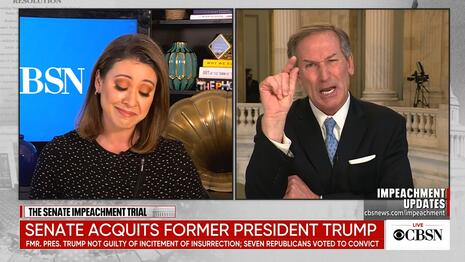 VAN DER VEEN: It’s not okay to doctor a little bit of evidence. The media has to start telling the right story in this country. The media is trying to divide this country. You are bloodthirsty for ratings, and as such, you’re asking questions now that are already set up with a fact pattern. I can’t believe you would ask me a question indicating that it’s alright just to doctor a little bit of evidence. There’s more stuff we uncovered that they doctored, to be frank with you, and maybe that will come out someday.

The media should be looking at that in a square, straight way. When I watch one news, I watch one station and it’s raining. I watch another station at the same time and it’s sunny. Your coverage is so slanted. It’s gotta stop! You guys have to stop and start reporting more like PBS does, rather than a TV news show that doesn’t have any journalistic integrity at all. What I’m telling you is that they doctored evidence, and I believe your question says that it’s only a Twitter check here and changing a date there....

The media shouldn’t be letting them get away with it, either. I’m tired of the biased media on both sides, left and right.

Before taking off his mic and concluding the interview, van der Veen said that "the media has to start living by the truth, and not try to create a narrative."