Someone might survey the current media landscape and lecture us conservative media watchdogs that our game is over. Is anyone in America so remarkably naive to believe that the news media are “objective” and nonpartisan, fair and balanced? This old claim seems to have been obliterated under President Trump, but it was also deeply eroded in the media’s incessant and aerobic adoration of Barack Obama.

Obviously, conservatives believe that the job of holding the news media accountable is ineluctably connected to the media’s alleged watchdog role. As long as the “objective” press sounds like tinny echoes of the latest Democratic Party messaging, someone needs to stay on watch and call it out.

After four years of reflection (and a reported $65 million his-and-hers book advance), the Almighty Obama has come forward to bless the media with a 768-page memoir, The Promised Land – and it’s only volume one, with another one expected to follow. This takes the Obama-loving reader through the victorious takedown of Osama bin Laden in May of 2011.

The New York Times book review by novelist Chimamanda Ngozi Adichie was typically unctuous: “Barack Obama is as fine a writer as they come. It is not merely that this book avoids being ponderous, as might be expected, even forgiven, of a hefty memoir, but that it is nearly always pleasurable to read, sentence by sentence, the prose gorgeous in places, the detail granular and vivid.”

This is all the same spin about his literary gifts that attended Obama’s first memoir Dreams of My Father, published back in 1995. Never mind that there’s a lot of Fake News in there, exposed by liberal journalist David Maraniss in his own Obama book in 2012, but no one noticed.

CBS “News” devoted 48 minutes to promoting Obama’s new memoir with the usual wingtip-kissing interviews. They shamelessly began on the show Sunday Morning with their morning host Gayle King, who has vacationed with the Obamas, and CBS thinks this is a plus, not an ethical minus. She proclaimed “People have been reaching out, saying they forgot – not forgot, but it was a reminder about the humanity and intelligence of Barack Obama, and also Michelle Obama."

A typical question, er, statement: “Ted Kennedy said to you, you don't choose the time, the time chooses you.” 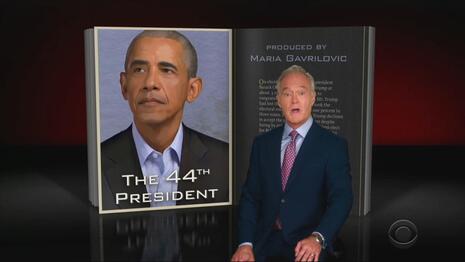 Then came 60 Minutes, where Obama received so many memorable tongue baths from CBS correspondent Steve Kroft. In this case, the reporter/publicist was Scott Pelley, who seemed mostly interested in getting Obama to denounce Donald Trump for trashing our democracy.

There was also an interview with National Public Radio, where Obama received so many foot massages from morning host Steve Inskeep, but weekend anchor Michel Martin almost made Inskeep look tough. She began by asking Obama “Have you developed any interesting COVID habits? Like some people are gardening. Mrs. Obama indicated she was learning to knit.”

Obama also returned a favor by granting another interview to Jeffrey Goldberg, editor-in-chief of The Atlantic who, after a series of Obama interviews in 2016, proclaimed on NPR that Obama was “the greatest terrorist hunter in the history of the American presidency.”

Like Pelley, Goldberg obsessed over Trump: “How much of the death and destruction we’ve seen—over the past five or six months especially, after the beginning of the pandemic—do you blame on President Trump?” Obama gave the media’s usual answer: A lot.

These are only the interviews granted before this doorstop of a book is available in stores. But we can already see that what Bernard Goldberg memorably described in his book title as A Slobbering Love Affair never ends.