For a 'Fact Checker,' WashPost's Glenn Kessler Can Be a Reckless Tweeter

Washington Post “fact checker” Glenn Kessler tweets much less than he retweets on Twitter. He retweets a lot of liberal-media themes. Sometimes his tweets are mangling the facts. Sister Toldjah at RedState noticed on Wednesday that Kessler “pulled a Schiff” the other day – he passed off a nasty parody of Trump as the real thing: 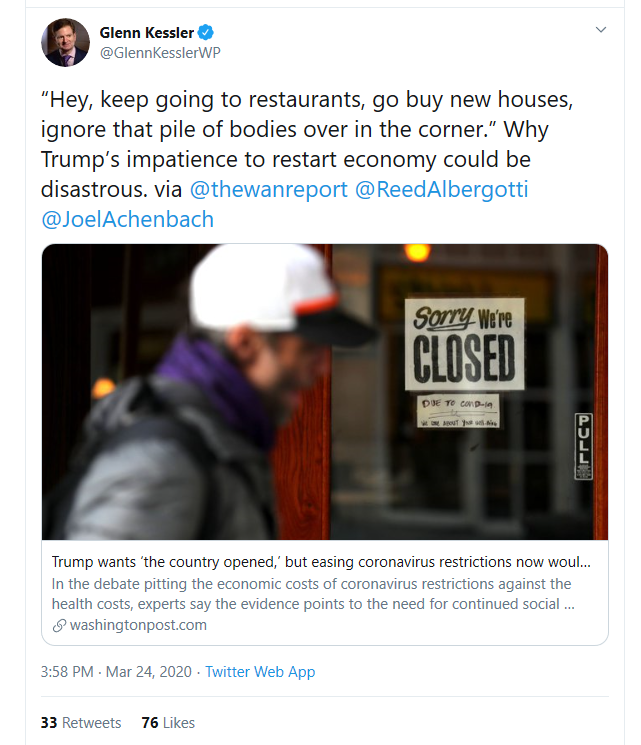 Thankfully, this isn’t a real Trump quote. It was a sassy take from leftist bazillionaire Bill Gates, who was the original Schiffer in this game. Kessler knew it was a Gates quote, since it was right there in the Post story he was promoting.

While not mentioning the president by name, Bill Gates – who co-founded Microsoft and now leads a global health foundation – rebuked Trump’s approach in a Tuesday interview with TED. “There really is no middle ground, and it’s very tough to say to people, ‘Hey, keep going to restaurants, go buy new houses, ignore that pile of bodies over in the corner. We want you to keep spending because there’s maybe a politician who thinks GDP growth is all that counts.”

(It’s a little funny that this slam on Trump comes with this Post boast: “The Washington Post is providing this story for free so that all readers have access to this important information about the coronavirus.” It's so "important" to get all the nasty parodies for free.)

Kessler was at it again in a Friday night tweet, forwarding a truncated Trump quote from JM Rieger, a video editor at his liberal paper.

This is not how it’s supposed to work. https://t.co/HpbMdEdheh

Like a good Democrat, Rieger left a lot of quote out...but included the video, so you could see how sloppy he was.

As for the not calling governors -- a hot spot for liberal invective -- Trump sounds like he's joking around.

"Mike Pence – I don’t think he sleeps any more. These are people that should be appreciated. He calls the governors. I tell him, I mean I’m a different type of person. I say ‘Mike – don’t call the governor [Jay Inslee] of Washington, you’re wasting your time with him, don’t call the woman [Gretchen Whitmer] in Michigan, it doesn’t make any difference what happens.” When ABC’s Jon Karl starts taking exception, Trump says “You know what I say? 'If they don't treat you right, I don't call.' He’s a different type of person. He’ll call quietly, anyway, okay?”

Let's guess that if Republican governors were slamming President Obama during a pandemic, the same reporters would be asking the president how he can stand working with these people when they're so political in a crisis.