A Thursday Washington Post profile lauded a black Florida Democrat as she argued for removing President Trump from office. It carried a valentine headline:

The oaths she swears by: Cop-turned-House-manager Val Demings has “that desire to always do the right thing.” 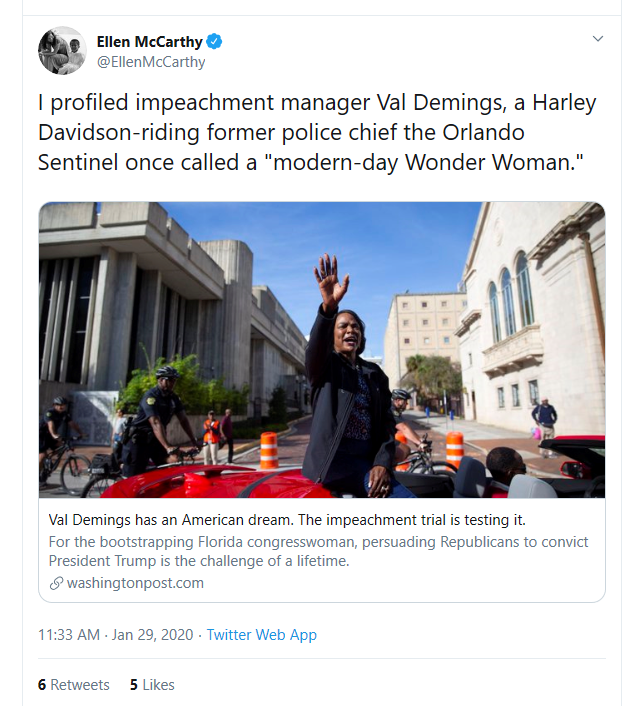 McCarthy wanted you to know that Demings was a policewoman, and then Orlando’s police chief before being elected to Congress in 2016.

Valdez Venita Butler, the seventh child of James and Elouise, has the kind of bootstrapping origin story that conservatives might exalt as a sign of high character if she weren’t a Democrat who wants to impeach Donald Trump.

Her parents raised Val and her six older siblings in a two-room shack in the woods. They struggled to get by, but Demings remembers her childhood as “the perfect life.” She and her siblings were fed a diet of old-fashioned American optimism: Occasionally, the future congresswoman would tag along with her mother to clean the magnificent-looking houses of white people, and she’d listen as her mom would “be on her soapbox” telling her and her siblings that they could do anything they wanted.

McCarthy can’t acknowledge that this “American optimism” is not the diet that liberals would feed black children. They would be lectured about America being Never Great. But Demings, she’s Wonder Woman. Media bias piled upon media bias:

The marathon-running, motorcycle-riding police chief cut a distinct figure among her fellow public servants. The Orlando Sentinel called her “a modern-day Wonder Woman.” When she retired from the force, [Mayor Buddy] Dyer encouraged her to consider getting into politics.

It’s what burns her now — thinking about how seriously she takes her oath, and feeling that Trump betrayed his.

“She’s a stickler for the law,” says Rep. Bennie Thompson (D-Miss.), chairman of the Homeland Security Committee, the first committee on which Demings served. “She understands, without being a lawyer, right and wrong.”

McCarthy talked of Demings taking an oath as a cop, and how it was tested in “situations where she could have abused her power, but didn’t. Upholding those oaths, she says, has defined her: “Having that desire to always do the right thing. And knowing that when I do the wrong thing, with the power that has been entrusted in me, people can die, people can be hurt, people can suffer.”

McCarthy offered zero criticism from Republicans, or even other Democrats. It was so glowing it could all be read while someone hums The Battle Hymn of the Republic, as Val's truth goes marching on: 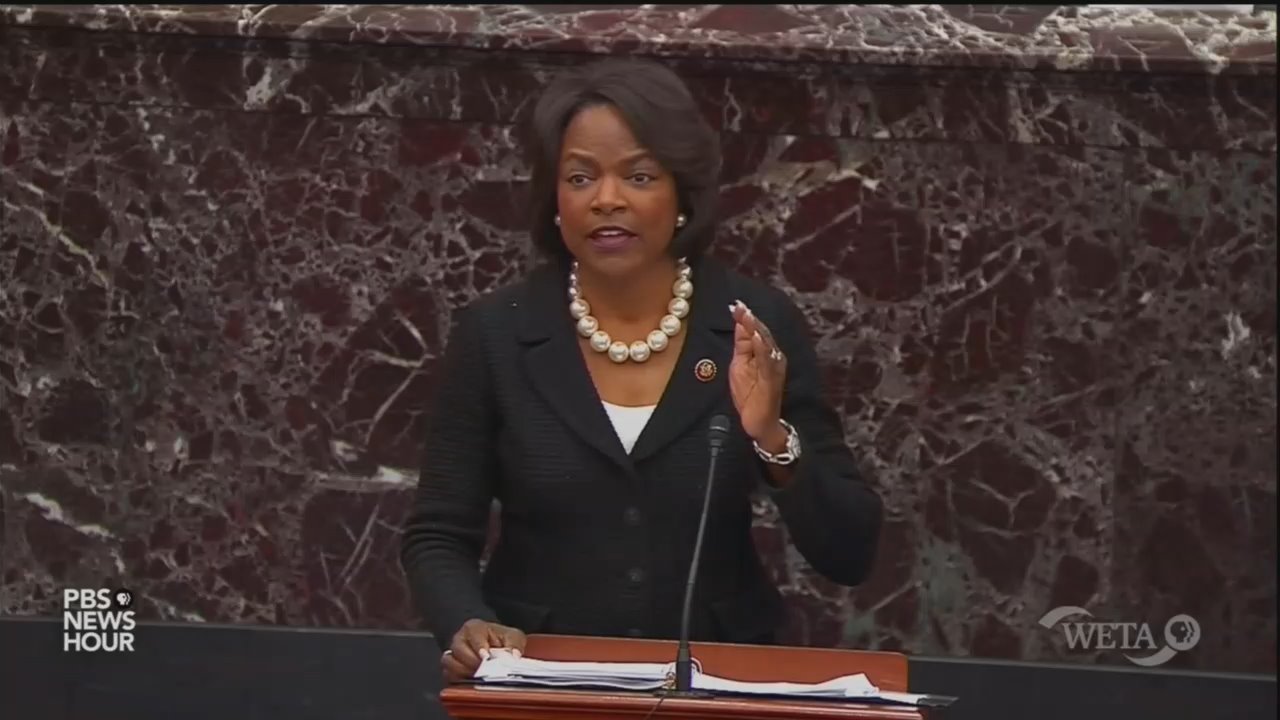 On the first day of the trial, Demings, standing at the lectern in a dark suit, burnished her law-and-order bona fides. “As a career law enforcement officer,” she told the senators, “I have never seen anyone take such extreme steps to hide evidence allegedly proving his innocence.”

…For Demings, this trial is not just about convicting Trump. It’s about upholding that vision of the country, which is central to how she understands her own life: one where opportunity comes when people follow the rules, do their jobs and keep their promises.

“When I look at my own story, you know — only in America,” Demings says. “So I am trying to protect that for every little girl and every little boy.”