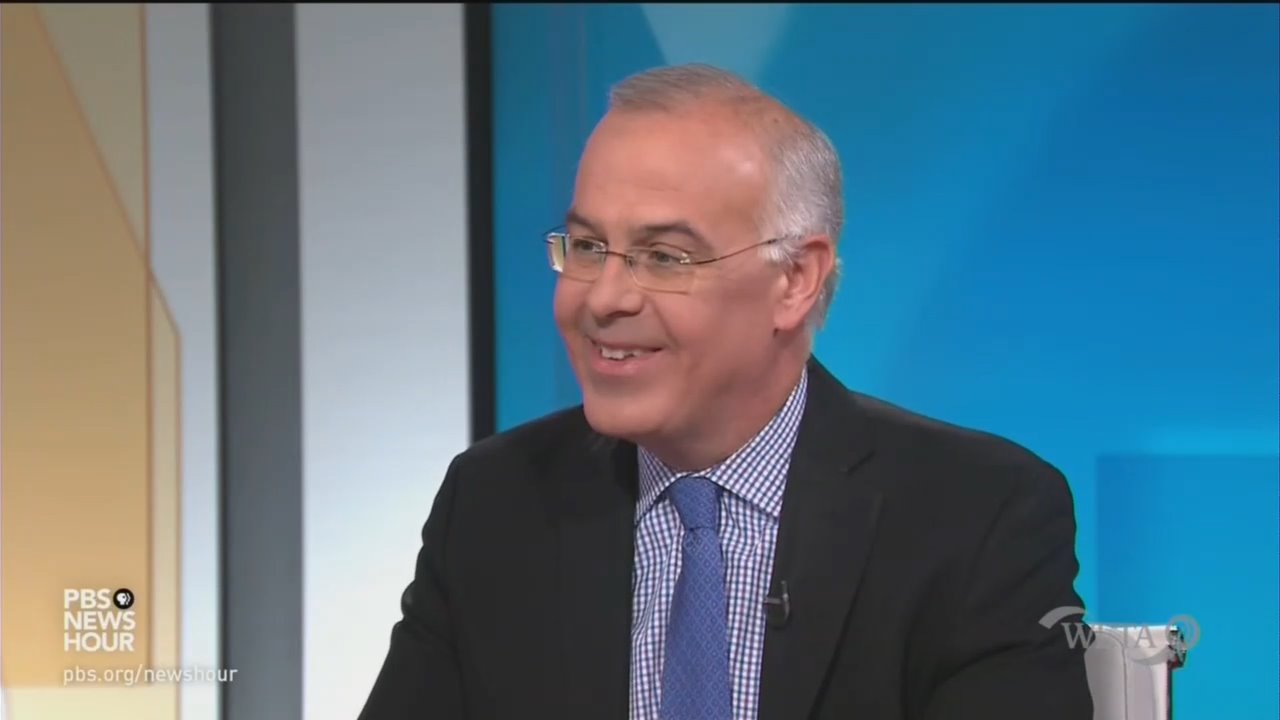 On Friday's PBS NewsHour, New York Times columnist David Brooks energetically sought to agree that President Trump should be removed from office, but the polling isn't so good. The percentage of people who think Trump should be removed has gone down, and the opposition to removal has gone up, "it's pretty much 50-50 basically, and so, if you're looking for it political pressure on Republican senators, you certainly don't see it so far out there."

But Brooks and liberal analyst Mark Shields agreed that the case against Trump has only gotten stronger, and that somehow, Speaker Nancy Pelosi was right to delay transmitting the articles to the Senate, even though she changed nothing about the Senate trial. Shields said "the political graveyard of dead ambitions is littered with the corpses of those who underestimated the speaker." Brooks said Trump looks even guiltier:

I have learned to never underestimate the ability of Trump to self-sabotage. So, I assume that he did more, and there's probably more — even within hours, there might be more [Lev] Parnas evidence and elsewhere. And so that will continue to come out. In my view, frankly, when we saw the phone call transcript of day one on this whole deal, to me, he was 99 percent guilty at that moment. And now he's risen to 99.9 percent guilty.

Brooks also expressed amazement that prominent men would damage their careers by joining Trump's defense team, because Adam Schiff "will just walk all over them."

DAVID BROOKS: I'm, frankly, struck by the number of people who have joined his defense team, Alan Dershowitz and Ken Starr. I wouldn't do this.

I mean, there's not — like, whatever you think of Trump or not, there's like not a lot of good arguments on your side. Like, why would you want to go to a movie where you got nothing but bad lines? And so I think they're all going to hurt them. I mean, I think they will get through this. But I wouldn't say it's a career enhancer for anybody. I don't know why they're all signing up for this.

JUDY WOODRUFF: You mean because you think they will say things that will hurt the case?

DAVID BROOKS: Schiff will just — he will just walk all over them, because he has the evidence on his side. So, it's not a debate you want to have when you're on a losing side. And this is basically a political game to get through it.

As usual, Shields agreed with Brooks when he's making a liberal argument, and added "This defense team has got a lot of I's in it, I mean, starting with Alan Dershowitz and Ken Starr, recently deposed president of Baylor University for an athletic scandal and other shortcomings, former federal judge. Pat Cipollone has the toughest job in the world managing it. I just don't see it a cohesive unit. And I think the Democrats are really in a lot stronger position with Adam Schiff and his team. I think they're far more cohesive, for one thing."

As often happens, Woodruff then steered Shields and Brooks to a much more positive conversation about the Democratic presidential primaries. They discussed Elizabeth Warren accusing Bernie Sanders (without evidence) of saying a woman couldn't be elected president without really suggesting it should hurt Warren. Brooks called it "bogus," and then Woodruff shifted to the notion that we shouldn't even debate whether women can win anymore.

WOODRUFF: I mean, neither one of these women candidates who are on the debate stage are shrinking violets. Neither Elizabeth Warren nor Amy Klobuchar is someone who retreats in a challenge.

SHIELDS: No, I agree. You wouldn't call either of them a shrinking violet, no. I would call them a rose.