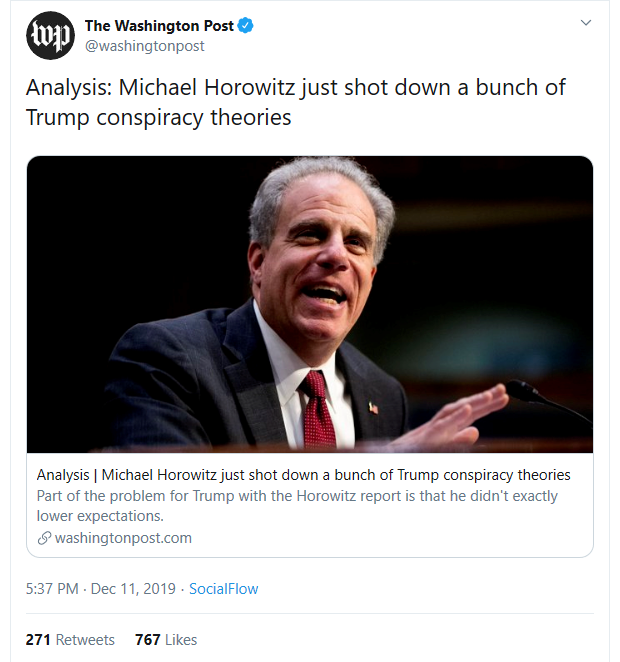 About two weeks ago, we reported that looking at one day of The Washington Post's main Twitter page during an impeachment-hearing day in the House underlined the Post's impeachment obsession: Seventy of their 183 tweets and retweets (38 percent) were focused on impeachment.

So as the Senate held a hearing with the Justice Department's Inspector General yesterday, we thought -- hmm. Let's go back to the Post Twitter page and see how this hearing compares with the House hearing on November 21. Guess what? It wasn't a big deal. In the 24 hours of December 11, the IG hearing drew only nine tweets out of 142 tweets and retweets (six percent).

After 3 pm, all the tweets were opinion pieces channeling the bias of the liberal, anti-Trump hardliners:

-- 5:00 pm: The first post-hearing take came from ex-neocon Max Boot: "How do the victims of Trump’s lies get their reputations back?" The "victims of Trump's lies" were named Comey, McCabe, Mueller, Strzok, and Page.

-- 7:12 pm: Post media columnist Margaret Sullivan worried some more about how the American people aren't understanding impeachment, and complained that Fox News didn't sound entirely like Chris Wallace on the IG report: "“The headline is that they didn’t find the things that Bill Barr and Donald Trump alleged,” Wallace told the Fox News morning viewers. “There was not political bias by James Comey or by his deputy Andrew McCabe."

-- 11:50 pm: They promoted a Jennifer Rubin column. "Opinion: DOJ inspector general sheds further doubt on the Trump team’s tactics." Rubin was on fire: "Things went from bad to worse for President Trump, his conspiratorialists and Rudolph Giuliani specifically in a Senate Judiciary Committee hearing at which Inspector General Michael Horowitz appeared." Forget about the Obama team's tactics. Horowitz had nothing for "Republicans’ ever-evolving, fact-free conspiracy theories." 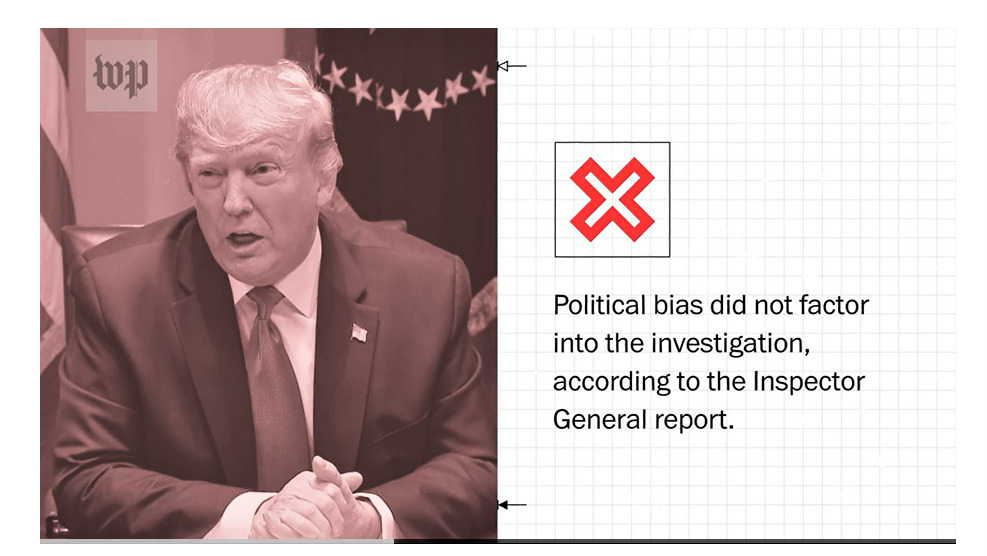 We counted a tweet at 6:35 am touting "Fact Checker" Glenn Kessler: "A guide to the misleading spin on the IG report" -- which criticized four GOP claims, and then one from Adam Schiff. It wasn't technically on the hearing, but it was on the IG. Perhaps the Schiff critique was added late, because the accompanying Post video is headlined "Fact-checking Republican spin on the Inspector General report," and is captioned "Top Republicans made a slew of false claims about the inspector general's report on the Russia investigation." Schiff didn't make the video.