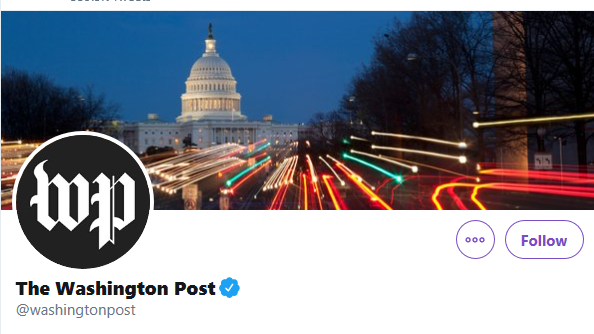 Washington Post editor Marty Baron loves to claim his newspaper isn’t all about defeating (or removing) President Trump. “We’re not at war, we’re at work,” he claims. But what if we took a look at the official main Twitter page for The Post? Would we find a war with Trump? The answer is: Yes.

On Thursday, November 21, the Post was covering the last day of Adam Schiff’s impeachment hearings, as well as the previous night’s Democrat presidential debate on MSNBC (co-sponsored by the Post). In the 24 hours of Thursday, the Post’s main Twitter page posted 183 tweets (including retweets). This is what we found:

-- Seventy of those (38 percent) were focused on impeachment. Another 29 tweets (16 percent) were about Trump or his administration.

The impeachment tweets were (almost by definition) overwhelmingly negative – they all seemed to try to build momentum for removing the president from office. The most popular tweet (with more than 5,700 likes) was "Fiona Hill shows how Trump and Republicans function as Putin's useful idiots."

Nineteen of the 29 non-impeachment tweets about Trump were identifiably anti-Trump, and the other ten were more neutral. One negative tweet was "Trump took credit for opening a Mac factory. It's been open since 2013." (The Post story elaborated: "On Wednesday, the company announced it had broken ground on a $1 billion, 3 million-square-foot campus that is expected to open in 2022 and initially house 5,000 employees.")

-- In contrast to that 54 percent, the MSNBC-Post Democrat debate drew only 17 tweets (nine percent).

Another five tweets could be defined as about Democrats, so that would get you to 12 percent. Many debate tweets were neutral or positive, such as "Beating Trump, rather than beating up on each other, was focus of fifth Democratic debate." One tweet/article criticized Bernie Sanders for a "wrong" answer on "Lock him up" chants (he wouldn't condemn them). One non-debate tweet/article noted Deval Patrick had only two people turn up at an event at Morehouse College.

It’s funny that other sections of the Post were an afterthought to the main Post account. There were nine tweets about sports. There was only one tweet about local politics, and that linked to an article touting how high Democrat Mayor Muriel Bowser’s approval ratings are. (There were another two tweets about Baltimore politics.)

-- Of 183 tweets, 56 (30 percent) were explicitly marked as “Opinion,” “Perspective,” or “Analysis,” or marked with shout-outs to opinion sections Post Opinion or Post Everything. Some of these were opinions on non-political topics (like sports).

This is fascinating when Marty Baron goes to college campuses and lectures Team Trump wants to disqualify the press as “an independent arbiter of fact,” and “we have to agree on a baseline set of facts, like what happened yesterday? And at the moment, we can't seem to agree on that, that everything is viewed through a partisan lens, and that's really disturbing.”

It's apparently not a "partisan lens" when the Post is tweeting these pieces:

"The administration's climate denialism is getting more and more dangerous."

"The frenzy of flattery around Trump is reaching new extremes."

"Democrats already have a popular, progressive agenda. They just need to amplify it."

And, from Dana Milbank: "Republicans have a new enemy -- truth itself."