O'DONNELL: But President Trump says Russian interference is a hoax.

President Trump has routinely dismissed the theory of Trump collusion with the Russians as a "hoax." But he has acknowledged the larger reality of Russian "interference" in the election in social-media campaigns.

O'DONNELL: While Facebook removed the fake Russian accounts, it refused a request by Biden's campaign to take down political ads paid for by theTrump campaign making claims that Biden says are not true.

BIDEN: Facebook is running right now -- paid advertising by Trump that everybody knows is a flat lie. You know, I'm glad they brought the Russians down. Why don't you bring down the lies that trump is telling and everybody knows are lies?

The CBS interviewer doesn't challenge that in any way. Instead, she suggested that the "lie" is going to win by being repeated:

BIDEN: Sure he is. And-- but it's comin' from a man with no integrity so it helps. ( Laughs) No, I-- I sincerely mean it. I-- I never thought I'd talk about a president this way.

Both the Democrats and their media allies just complain in public that someone might believe the Bidens were sleazy -- not just Hunter, but Biden's brother Tom, which didn't come up. O'Donnell explained briefly that while Vice President Biden was given the portfolio of Ukraine policy, his son served on the board of a Ukrainian oil and ga company: "Hunter Biden was reportedly paid $50,000 to $80,000 a month for several years while serving on Burisma's board." She didn't explain how much experience Hunter had in that industry -- zero. CBS just cued up the tale Biden tells: 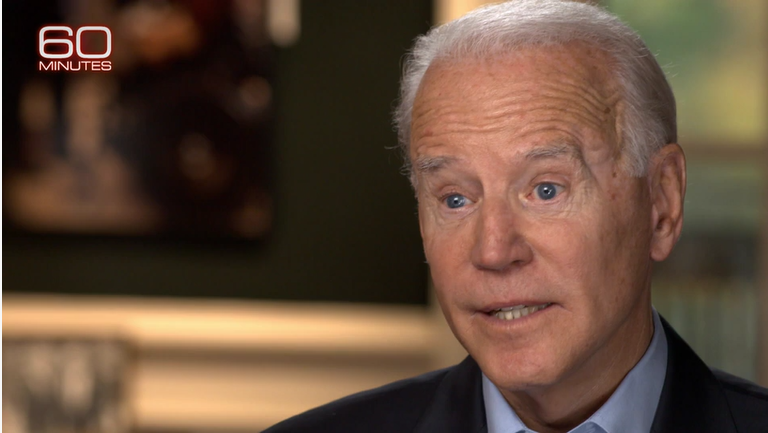 O'DONNELL: Hunter said the only thing you said to him was, quote, "I hope you know what you're doing."

O'DONNELL: What do you--

BIDEN: What I meant by that is I hope you've thought this through. I hope you know exactly what you're doin' here.

A serious reporter would push back on the notion that there were no conversations in all this family business. Would O'Donnell accept Trump saying he never talked business with his children? For one minute? But O'Donnell could only offer the mild rebuke a fellow Democrat would offer, while flattering him as a statesman:

O'DONNELL: But you understand people say, "Joe Biden, he's an experienced politician, statesman, knows the issues of Ukraine. Why didn't he just say to his son, 'this is one to take a pass on. It may not look good'"?

BIDEN: He was already on the board. And he's a grown man. And it turns out he did not do a single thing wrong, as everybody's investigated.

He's never done a single thing wrong? Where is the pushback? But CBS simply cued him up to trash-talk Trump:

O'DONNELL: President Trump has said publicly, "Joe Biden and his son are stone cold corrupt." And chances are, he's watching this interview. Anything you wanna say to him?