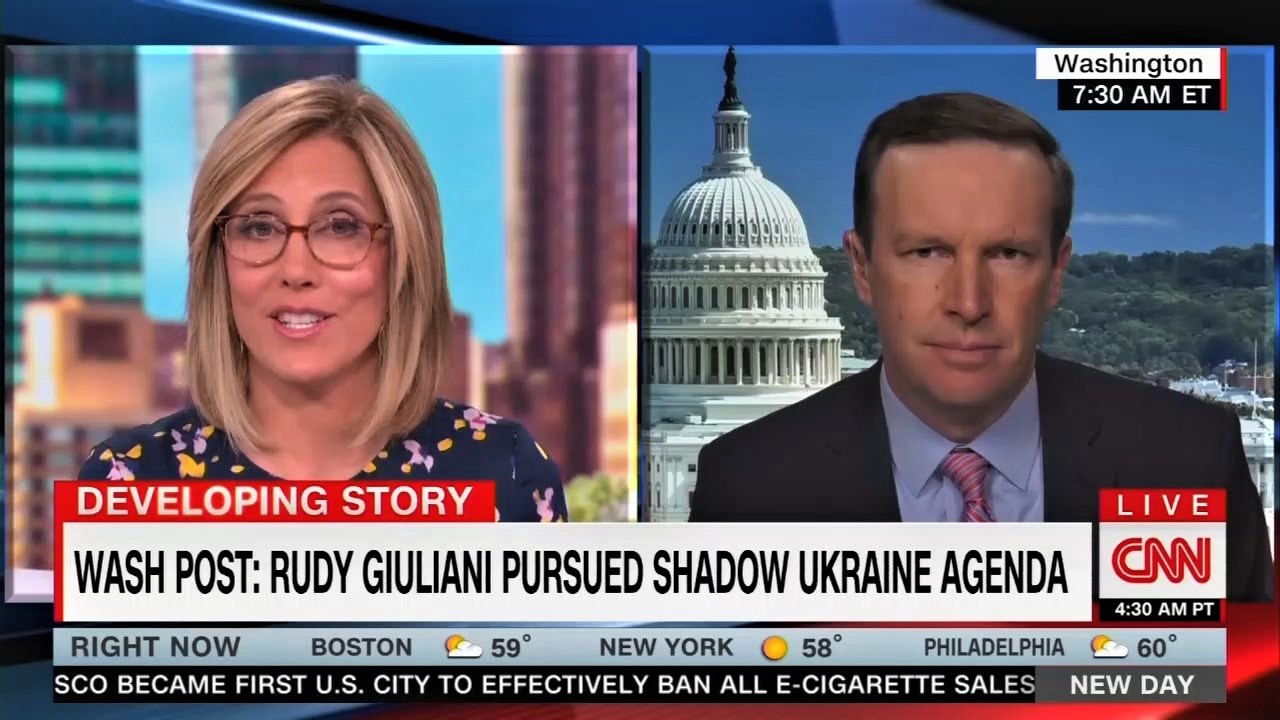 It's always amusing when reporters insist that they're not "stenographers to power," but when you look at their interviews with Democrats, they often come across as stenographers -- extremely accomodating, and not at all challenging. Take for example, Sen.  Chris Murphy of Connecticut in his interviews on the Ukrainian kerfuffle on Wednesday. None of his three national TV interviews seriously raised the idea that he or other Democratic senators pressed Ukraine in a similar way to President Trump to cooperate with their domestic political goals.

CNN reported earlier that three Senate Democrats pressed in a letter that Ukraine had better cooperate with Robert Mueller's probe in the Ukraine, so as not to disturb the "robust and close" U.S.-Ukraine relationship. The New York Times reported on Sept. 9 that Sen. Murphy told Ukraine's president it would be "disastrous for long-term U.S.-Ukraine relations" (hint-hint) if he were seen as accomodating Trump's wishes.

The Times added "Mr. Murphy rejected the suggestion that his advice to Mr. Zelensky constituted meddling in Ukrainian affairs similar to Mr. Giuliani’s efforts, which he had previously called 'private foreign policy engagement' and into which he had sought an investigation."

So let's look at Murphy's day of softballs. In the morning, he appeared on CNN's New Day, where co-host Alisyn Camerota asked: "What did President Zelensky tell you about this now-infamous phone call with President Trump?"

On Wednesday afternoon, Murphy taped an interview with PBS NewsHour anchor Judy Woodruff, aka Judy Powderpuff. She began with a tee-ball: "Given your longtime knowledge, familiarity with Ukraine, what is your reaction to this memo we are now seeing of the conversation between President Trump and the president of Ukraine in July?" Murphy talked for 77 seconds about how it was "devastating."

This was the lamest recitation of Trump's response, and not really a question: "Senator, as you know, though, the White House is saying this is just an effort, an open effort by President Trump to encourage the Ukrainians to clean up corruption in their -- in their government." Murphy claimed the president only talked about Biden, and somehow left out Trump's questions about CrowdStrike and hacking during the 2016 election.

Woodruff concluded by asking about the acting Director of National Intelligence testifying to Congress. She asked Murphy: "What would you want to know from him?"

Sen. Murphy wrapped up the day with a warm blanket from The Rachel Maddow Show on MSNBC:

MADDOW: Tell us where you're at right now on this story, given your sort of unique subject matter expertise in this area and what has unfolded over the course of this last 48 hours. What do you make of this moment that we are in?

MURPHY: ...[T]hough I haven't seen this whistleblower complaint, I guess that it may provide some really alarming context to how comprehensive this effort was to try to enlist the Ukrainian president in the president`s 2020 reelection campaign. And so when I went to Ukraine, I raised this with the president, with President Zelensky. I told him that it really was not in Ukraine`s interest to get involved in the 2020 election. He assured me they had no interest in doing so.

Maddow only brought out the charges of Democrats pressuring the Ukrainians as "weird whataboutism" from Trump: 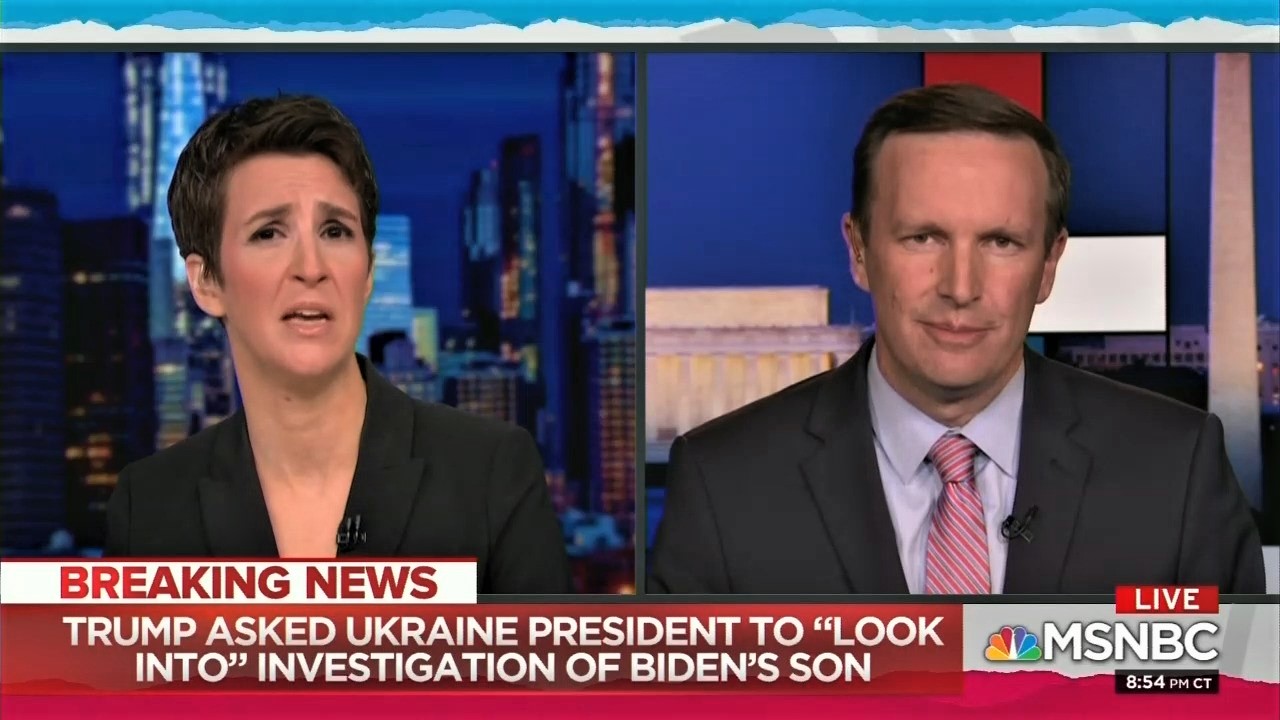 MADDOW: Now, the president tried to drag you into this by essentially claiming your contacts with the Ukrainian government, your discussions with President Zelensky themselves should be seen as improper, which is sort of weird whataboutism, he accused you of having threatened the government of Ukraine. I have to ask your response to that.

MURPHY: Yes. I mean, that's an interesting Jedi mind trick by the president, to suggest that I am engaged in corruption because I'm telling the Ukrainian government to not accede to the president`s corrupt request for them to interfere in the 2020 election.

I'm very clear about what I said to the president of Ukraine. I told him that if he's talking to the United States, he should be talking to the State Department. He should not be engaged in conversations with the president's reelection campaign. And if he were to do that, he would damage his credibility globally and in the United States, that is not undue interference.