"Independent fact checkers" like Glenn Kessler at The Washington Post love counting up when Donald Trump repeats something he flagged as False. So what happens when fact-checkers keep repeating their own canards? See PolitiFact during President Trump's rally in North Carolina on Monday night. They can't stand when Trump mocks the Democrats as radical on abortion, like in this passage:

PRESIDENT TRUMP: Virtually every top Democrat also now supports late-term abortion. [Booing] Ripping babies straight from the mother's womb, right up to the moment of birth. [Booing] And if you look at Virginia, the governor of Virginia, he was even talking about essentially, you would say an execution. He was talking after the baby is born, the doctor will talk to the mother and they'll make a decision as to whether or not that baby lives. This is a radical Democrat idea! That's why I've asked Congress to prohibit extreme late-term abortion because Republicans believe that every child is a sacred gift from God.

PolitiFact touted its own cockamamie ruling from February on Twitter: 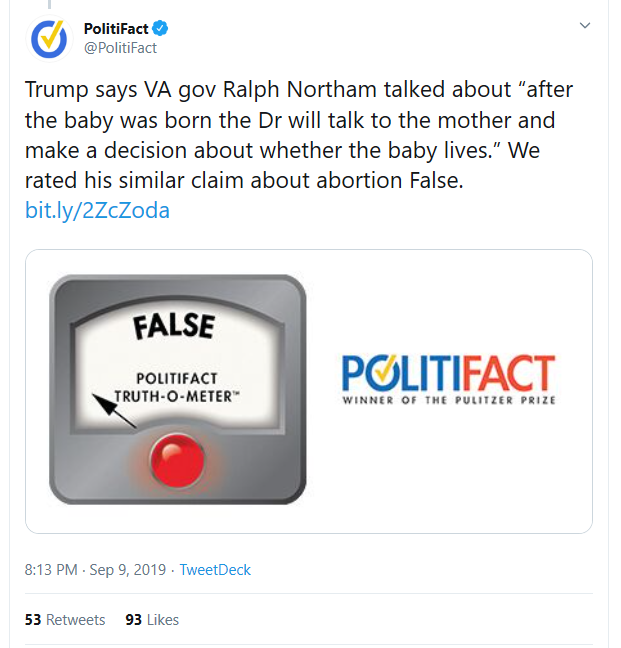 Trump is accurately summarizing what Northam awkwardly said back then, that there was a right to choose after birth:

We noted back then that there's no definitive data on how many late-term abortions are for babies with severe deformities. The Congressional Research Service's lead investigator on this matter estimated "abortions for fetal anomaly ‘make up a small minority of later abortion’ and that those for life endangerment are even harder to characterize.”

In other words, at best, the picture of late-term abortions is too blurry to make precise "fact checking" verdicts. But they unpack the bluster and fire the Truth-o-Meter at the president.

This was NOT the only tweet that PolitiFact used to repeat their earlier distortions. There was also this old baloney: 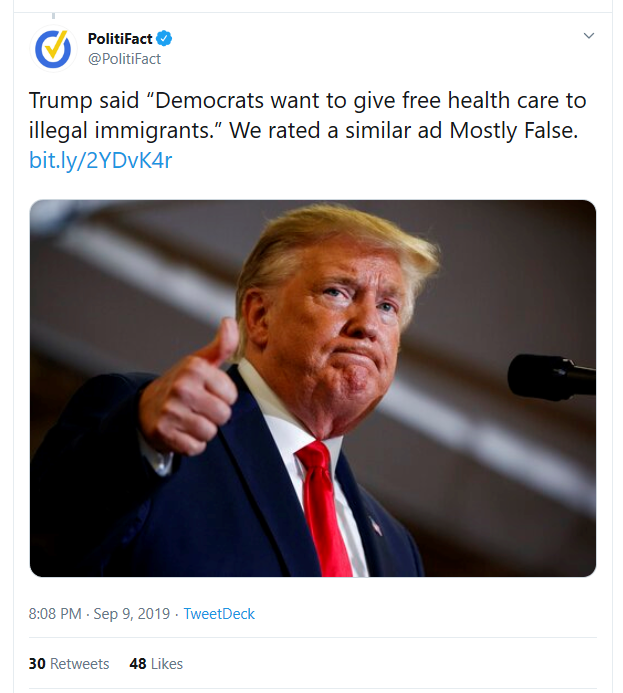 We also flagged this verdict as distorted. They obsessed over the word "free" here. NBC moderator asked if they favored including illegal immigrants in their government health care programs, and all the Democrats raised their hands. Trump put out an ad stating "These Democrats support giving illegal immigrants free health care at our expense." PolitiFact proclaimed this was "MOSTLY FALSE," because they didn't say "free health care" by raising their hand!