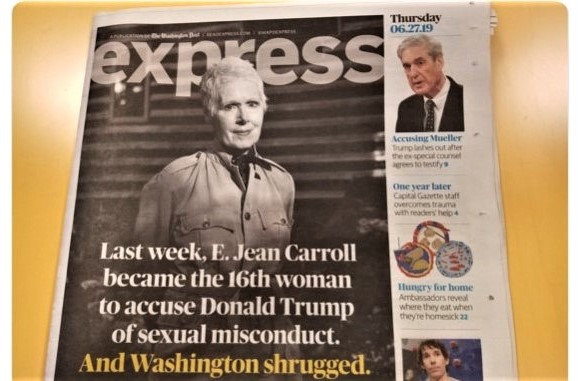 Washington Post political reporter Amber Phillips jetted right past objectivity on Wednesday and ranted about the lack of outrage over author E. Jean Carroll's allegations of sexual assault by Donald Trump in a dressing room from the mid-1990s. In the cover story of Thursday's edition of the Post's free tabloid Express, the headline was this:

Why powerful politicians from both sides of the aisle are saying little and doing even less about the latest allegation against the president.

Inside the headline it was "Where's the outrage? Politicians essentially shrugged at the latest sexual assault allegations against Trump."

The story began: "A woman has accused President Trump of forcefully sexually assaulting her, and powerful politicians on both sides of the aisle aren’t really that outraged. In fact, many of them don’t seem focused on E. Jean Carroll’s accusations at all, according to a Washington Post survey of top lawmakers this week."

Phillips made absolutely no reference to Carroll's strange interviews, like her insisting to Anderson Cooper that "most people" thought the concept of rape was "sexy." That kooky outburst seemed to cool the media's ardor for the story.

She turned for expertise to feminist professor Kelly Dittmar of the Center for American Women and Politics at Rutgers, who had some theories on why politicians are shrugging. This first one apparently sounds unfair:

Women must prove their accusations before they’re taken seriously

The burden of proof often rests on the victim and not the accused assailant.

When crying "rape," some evidence would seem to be required. That would start by being able to pinpoint a date for your assault, which Carroll can't narrow down to a year. It's reminiscent of the Post putting accuser Kristin Anderson on their front page in October of 2016, although Anderson couldn't remember much of anything. She said a brief groping occurred sometime in "the early 1990s" at a Manhattan night club she can't recall, and can't remember who was with her. She did recall a "tufted red couch," so she went Googling and found photos from a place called the China Club, a purported Trump hangout.

Then there was the theory that there's "numbness" to the allegations, that there are too many Trump accusers, and then this:

....Democrats threw out everything they had to stop [Justice Brett] Kavanaugh, and they lost that battle. Couple that with losing the 2016 presidential election, and they have some powerful data points to argue going after Trump’s alleged sexual misconduct history is not the way to beat him.

“On the Democratic side,” Dittmar said, “the shrug is: ‘Well, everybody knows this and they still aren’t reacting, so what can we do about it?’”

On the other side, Republicans are apparently afraid to side with Trump's accusers.

High-profile GOP candidates for Congress who criticized Trump for bragging about sexual assault in a Access Hollywood video lost their races or nearly lost their primaries, even years afterward.

The 2020 election is right around the corner, and Trump is still incredibly popular among base voters. So Republican candidates can’t risk being seen as disloyal to him now.

“If you’re a Republican,” Dittmar said, “you’re going to say: 'Well, in this environment, everybody’s just out to get him, and it must be false.”

Obviously, Carroll and her promoters in the media are "out to get" Trump. That's not disqualifying, but the motives for making the accusation can influence public opinion. It's not unreasonable to say Carroll hasn't brought enough evidence to stop the "shrugging."

This newspaper also has a double standard on serious sexual harassment allegations. Back in 1994, a fight broke out in the Washington Post news room between reporter MIchael Isikoff and editor Fred Barbash over how they took three months to publish any of Isikoff's findings on Paula Jones accusing Bill Clinton of sexual harassment. There was no need for feminist professors to offer theories on why the liberal paper was so reluctant to publish those accusations, even though Clinton ended up settling with Jones for $850,000.