The liberal media honor their celebrity activists as if they are the most compassionate progressive humans on planet Earth. In Sunday's Washington Post, the Arts & Style section carried a big story headlined "The political awakening of Alyssa Milano: Her list of small-screen credits fade against her newly carved role as an A-list social activist." Milano was honored -- yes, honored -- as the current Jane Fonda:

She was named one of “The Silence Breakers,” Time’s collective Person of the Year. Outspoken and ubiquitous, Milano went into overdrive. She appeared on Capitol Hill during the Brett Kavanaugh hearings, and protested in front of the White House. She visited Parkland, the border and Flint, Mich., launched an activist collective challenging the NRA’s political influence, campaigned for Democratic candidates and against Georgia’s abortion bill.

Of all people, it is a star of anodyne television who became one of MeToo’s leading voices, pushing it to the forefront more than a decade after Tarana Burke founded the movement. Milano gained enduring popularity from that comfort-food programming, and she has harnessed it — and her abundant social media skills — to become an A-list activist.

She’s the Jane Fonda of the current era — if Fonda hosted Project Runway All Stars and appeared in a continuous loop of Charmed reruns.

You can tell they don't really buy that Milano's as good at acting as Hanoi Jane, noting she's "not once been nominated for an Emmy." But Post feature writer Karen Heller can really produce a progressive puff piece. Naturally, she turned to other liberal heroines for praise:

Filming [Netflix series] Insatiable in Atlanta became a political opportunity. “There’s a lot of good trouble to get into in Georgia,” says the actress, who has a professor come to the house monthly to teach her constitutional law. Milano is “a committed, passionate fighter and advocate for reproductive rights in Georgia and nationally,” notes former gubernatorial candidate Stacey Abrams in an email. “Her activism has centered on the people of Georgia.”

The Post didn't mention that Georgia passed the "heartbeat bill" Milano called "so evil" -- which bans abortion after a baby's heartbeat can be detected -- and Brett Kavanaugh is on the Supreme Court, so Milano isn't exactly Winning. But somehow, everything she does helps people (not counting the unborn babies): 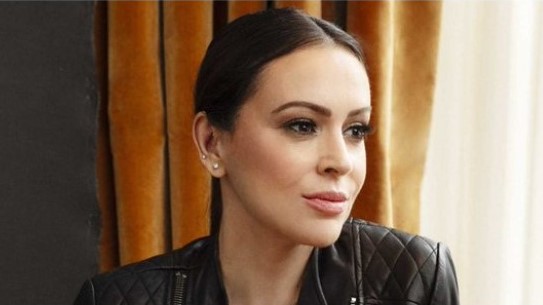 “Part of the reason I don’t want her to slow down is that I see how many people she’s helping,” [husband Dave] Bugliari says.

“The times in my life where I’ve felt most fearless have been in those moments of activism,” she says, “whether it be walking through an active minefield or sharing my story of sexual assault with other women.”

She prefers these moments over the sundry Lifetime movies and Netflix series that allow her to pursue them.

Even the trolls are helping. “There’s an element of almost satisfaction, maybe being emboldened, that I must be doing something right because they are really angry. If I wasn’t so impactful, would they need to be as vicious? Are they trying to silence me, trying to hurt me?” she asks, tapping her Docs. “Because, like, none of it’s working.”