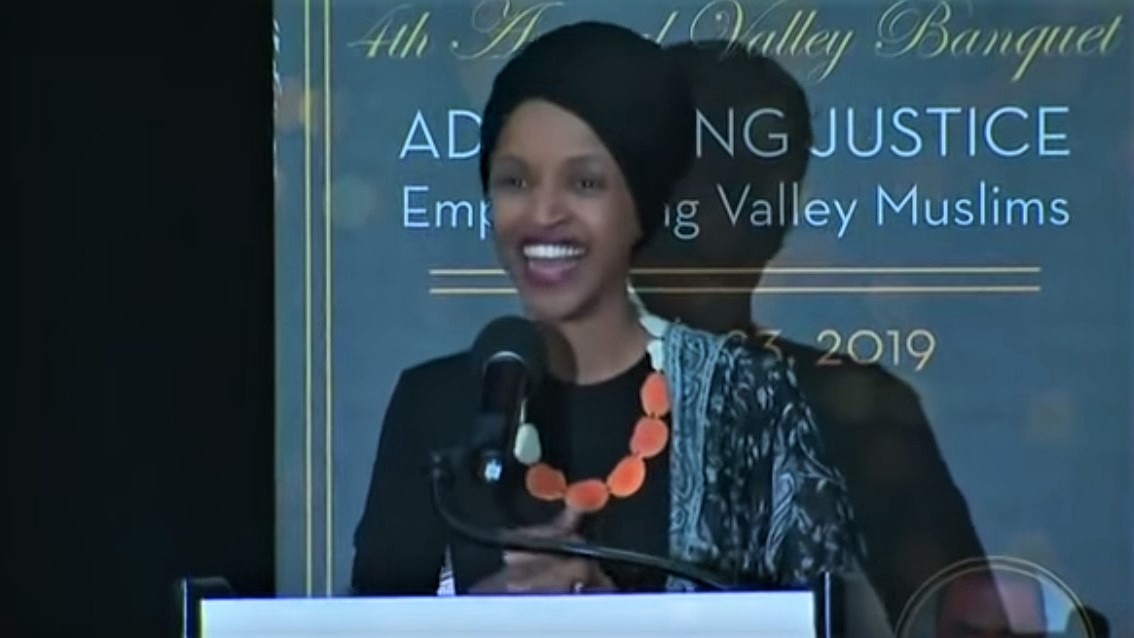 The Washington Post "Fact Checker" completely avoided any Pinocchios for a fact-mangling Democrat again. That's because the liberals at the Post were upset at the conservative outrage that Rep. Ilhan Omar said "some people did something" on 9/11. The "fact" squad said they wanted to put the remarks "in context"....but they actually defended Omar by comparing her speech to President George W. Bush's speeches in the days after 9/11.

That's not a factual matter. This is. Two weeks ago, I concluded a blog on Omar's speech at a fundraiser for the Council on American-Islamic Relations with this:

For the "independent fact-checkers," we recommend the clip at 12:50, where Omar claimed "CAIR was founded after 9/11." Wrong. Its own website says it was founded in 1994.

I glossed over what other conservatives are highlighting, that she could only babble that "some people did something."

Kessler acknowledges Omar screwed up on the facts, but so do haters of CAIR:

CAIR was founded in 1994, not after the Sept. 11, 2001, terrorist attacks. Jeremy Slevin, Omar’s spokesman, said she misspoke and meant to refer to the fact that the organization had doubled in size after the Sept. 11 attacks.

CAIR is not a terrorist organization, but an aggressive Muslim civil liberties organization, modeled on the Anti-Defamation League.

Kessler often waves off Pinocchios for the Democrats if their PR operatives say "he/she misspoke." The blog is titled "For The Record," so it's not about the embarrassment that Omar was getting a very basic fact wrong about CAIR at a CAIR-Los Angeles fundraiser. Their "Share the Facts" tweets didn't point out Omar mangled facts. It might almost suggest to readers that Omar's statement was accurate: "For the record, CAIR was founded after 9/11...." 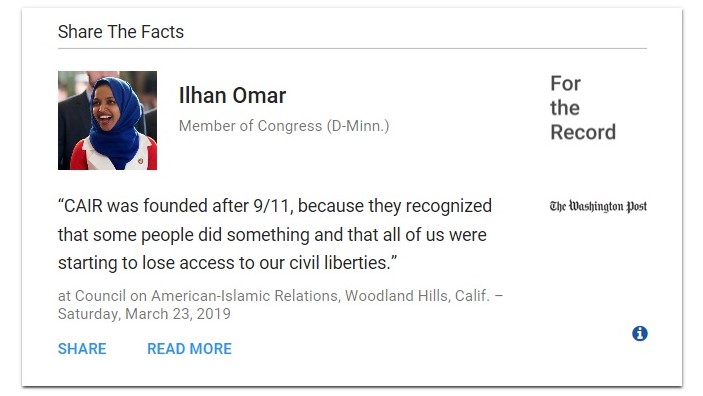 Kessler doubled down in defending Omar by bizarrely suggesting a similarity with President George W. Bush trying to unite the country as he stood on the rubble of the World Trade Center on September 14, 2001, and spoke with a bullhorn:

How this resembles Omar's remarks is anyone's guess. Bush here is promising that these "people" are going to be punished for their mass murder. But the "context" cops get even worse. Kessler added another Bush speech in that time period (September 17, 2001) that says nothing about the terrorists, but only about Muslim Americans in the broadest possible way:

omen who cover their heads in this country must feel comfortable going outside their homes. Moms who wear cover must be not intimidated in America. That’s not the America I know. That’s not the America I value. I’ve been told that some fear to leave; some don’t want to go shopping for their families; some don’t want to go about their ordinary daily routines because, by wearing cover, they’re afraid they’ll be intimidated. That should not and that will not stand in America."

That Bush referred to "some" Muslim people is the only weak connective thread.

This the accompanying "Fact Checker" video the Post made, complete with Bush clips: