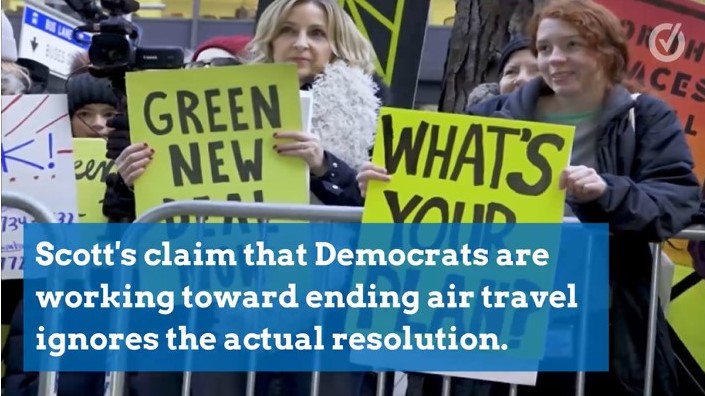 The “fact checkers” keep sounding like they’re merely doing aggressive spin for the Democrats. On February 25, PolitiFact flagged Sen. Rick Scott (R-Fla.) as “False” for writing in an Orlando Sentinel op-ed that the Green New Deal has a goal of “ending air travel.”

Just like the Washington Post “fact checkers who hammered Rep. Liz Cheney on this,” PolitiFact’s Amy Sherman says “climate advocates” insist everyone should ignore the FACT that Rep. Alexandria Ocasio-Cortez’s team put out a Frequently Asked Questions document that explicitly said “We set a goal to get to net-zero, rather than zero emissions, in 10 years because we aren’t sure that we’ll be able to fully get rid of farting cows and airplanes that fast.”

The resolution makes no mention of ending air travel. Instead, it calls for "overhauling transportation systems," which includes "investment in high-speed rail." Scott seized on a messaging document from Democrats that mentioned, perhaps in jest, getting rid of "farting cows and airplanes." But we found no evidence that getting rid of airplanes is a serious policy idea from climate advocates.

We rate this statement False.

Perhaps in jest? Is this site called PolitiGuessing? They aggressively spin by citing “climate experts,” meaning leftist eco-czars who want to push the Democrats to redesign the economy toward some “carbon-neutral” future:

Experts on climate change say it’s important to focus on the language in the actual resolution and not the FAQ, which carries no weight.

"It seems to me those lines from the FAQ were lighthearted and ill-considered, and it’s not clear why they were posted," said Sean Hecht, Co-Executive Director, Emmett Institute on Climate Change and the Environment at UCLA law school.

Hecht noted that the FAQ doesn’t include any regulatory strategy to ban or even reduce air travel.

This is also a little funny, because as PolitiFact notes the House resolution is….nonbinding. Meaning “it carries no weight.” Except for branding the Democrats on “climate change.” Apparently Republicans must be shamed for trying to focus on the extremism of the Democratic fringe.

PolitiFact's leftist experts then insist the "fact" is you can't take Team AOC seriously, at all.

"The comment about cows and planes is not at all an expression of a policy goal to actually eliminate either. It is delivering information that some supporters may not want to hear -- that we will not zero out emissions completely, so we need some additional negative emissions -- expressed in what I take to be a colloquial tone that unfortunately left it open to misconstrual by critics," said David Weiskopf of NextGen Climate America, funded by Tom "Impeach Trump" Steyer. "No serious observer, supporter of the Green New Deal, climate scientist, or other climate advocate would take these statements as expressing a policy aim to eliminate cows or planes."

Senator Scott's statement was not "False." He merely focused on one of the hottest rising Democratic stars...who apparently is an un-serious nut.