How dare anyone criticize female Democrats running for President! That was the theme on CNN Newsroom with Brooke Baldwin on Thursday. The CNN anchor was unhappy that Starbucks CEO Howard Schultz praised an article by Roger Simon on PJ Media that mocked Kamala Harris and Elizabeth Warren. CNN's Kirsten Powers denounced PJ Media (and writer Roger L. Simon) as "pretty outside the mainstream, to be kind" and smelled sexism: "What's his problem with all the women in the Democratic Party?"

BROOKE BALDWIN: Kirsten, I wanted to get your reaction to a tweet that was deleted from Howard Schultz's Twitter account that contained an article that slammed Senator Kamala Harris as shrill and quasi-socialist and called Elizabeth Warren, quote, Fauxcahontas? A play on, obviously, Trump's slur against her, and so here's Howard Schultz explaining why he got rid of the tweet.

She's apparently borrowing from an account in The Hill newspaper, that highlighted those passages:

“Thank you @Rogerlsimon for a thoughtful analysis of what’s possible. #ReimagineUS,” Schultz tweeted, along with a link to an article on PJ Media by Roger L. Simon titled “Howard Schultz Could Actually Win the Presidency."

“Current frontrunner Kamala Harris is far from reassuring,” Simon writes in the column. “She’s a shrill (see the Kavanaugh hearings) quasi-socialist promising pie in the sky — Medicare-for-all, debt-free college, guaranteed pre-K, minimum basic income, confiscatory taxes — and she’s just getting started. Bernie and others will soon be following suit. Fauxcahontas already has, competing in a game of socialist one-upmanship.”

Schultz told Cooper he did not realize Simon had made those comments: 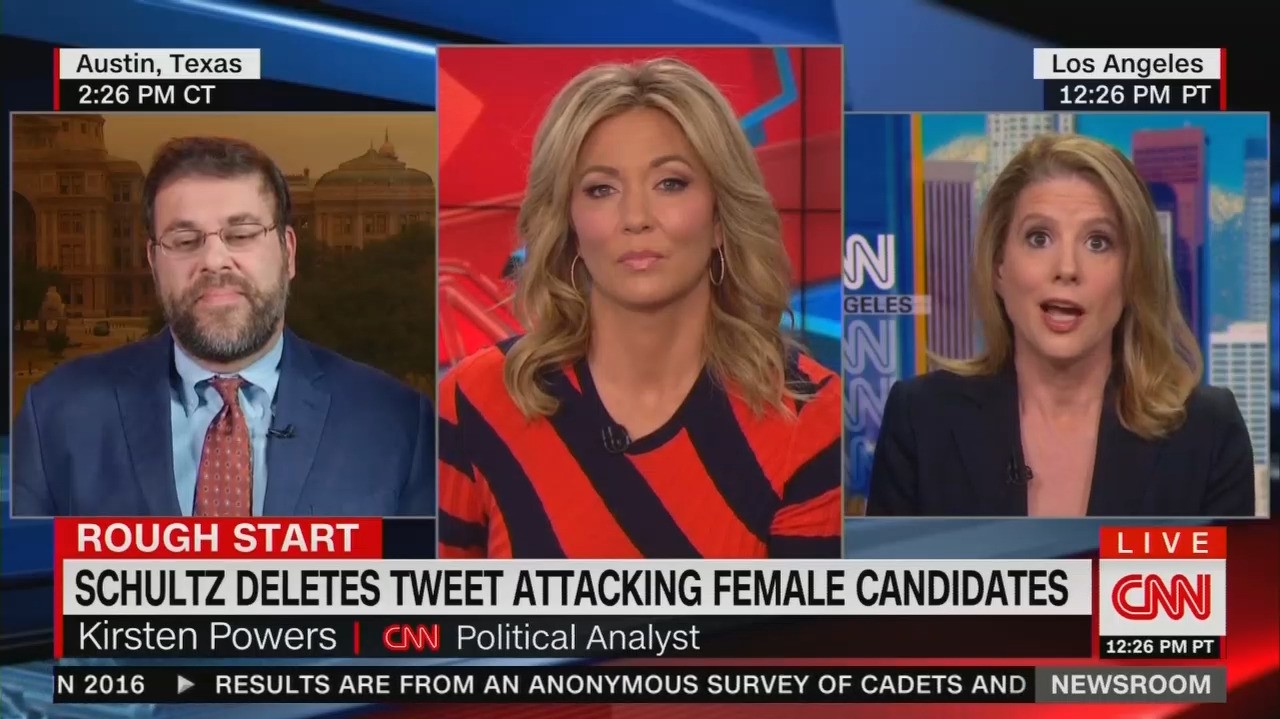 BROOKE BALDWIN: So reportedly, someone else posted the tweet and an aide told CNN the person didn't fully vet this piece, but you know, Kirsten, not a good look, especially when you criticize the president for his use of social media.

KIRSTEN POWERS: Well, it also was an article from PJ Media, which is a pretty outside the mainstream uh, publication, to be kind. And so why is the person who's working for him even, you know --, presumably read this, because they were praising it so I don't think that that looks good. I want to focus in on the fact that he keeps saying he wants to elevate the conversation, but really what he's done is he's come out and attacked Elizabeth Warren, you know, Kamala Harris, Congresswoman Ocasio-Cortez. What's his problem with all the women in the Democratic Party? I mean, I don't see a person who's trying to elevate the conversation. He's just making attacks against people, and he's misrepresenting positions that people hold, also. So you know, I think he's somebody who I've had a lot of respect for, and I'm pretty disappointed in the way that he's behaving.

This is funny stuff. Who's "pretty outside the mainstream" these days more than Kirsten Powers? Is she "elevating the conversation"? For example: