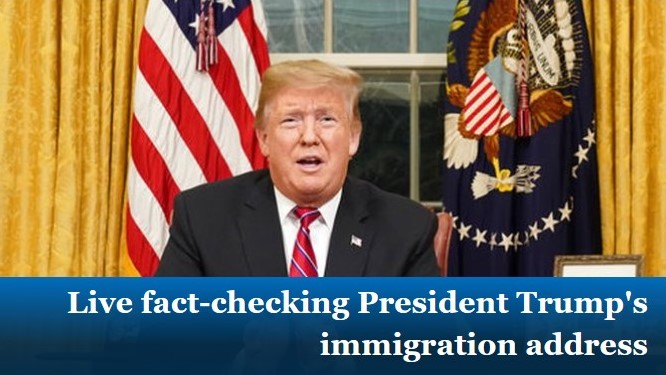 They singled out this passage from the Trump address: "Senator Chuck Schumer, who you will be hearing from later tonight, has repeatedly supported a physical barrier in the past along with many other Democrats. They changed their mind only after I was elected president."

Then they insisted it was misleading (and notice how Team Trump used the words "physical barrier" on Schumer):

This is misleading. The physical barrier Schumer has supported is very different from the wall Trump has in mind.

In 2006, then-Sens. Barack Obama, Chuck Schumer and Hillary Clinton voted for the Secure Fence Act of 2006, which was signed into law by President George W. Bush. They authorized a fence along about 700 miles of the border between the U.S. and Mexico.

The Government Accountability Office reported U.S. Customs and Border Protection had constructed 654 miles of fencing by 2015. That includes the steel fence dividing Nogales in Arizona and Mexico, which is between 18 and 26 feet tall, according to the Associated Press.

The fence they voted for is not as substantial as the wall Trump is proposing -- which is supposed to be higher, longer and more contiguous. In fact, Trump criticized the 2006 fence as too modest during the 2016 campaign.

This underlines that these "fact checkers" are really "context checkers," because the sentence itself is true. Schumer and other Democrats repeatedly supported a physical barrier in the past. It doesn't make Trump's current sentence "un-factual" that he said the fence was too modest as he campaigned. It's an interesting oppositional point, but it doesn't make the sentence "misleading." But this is PolitiFact's posted box from "Share the Facts," which you can share on Facebook or Twitter, or embed in your blog post:

On the facts under review, this box is more misleading than Trump's "misleading" sentence about Schumer. 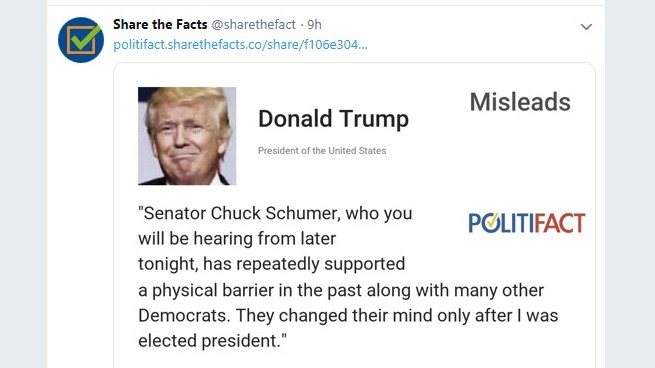 Snopes.com previewed the speech by defending Schumer and Pelosi, ruling it was "False" that they favored handing over $150 billion to Iran in the Iran deal (which was their frozen assets).