Reuters Cheers the 'Hope' of Assisted Suicide Being Legalized in Spain

One easily demonstrable way that secular media outlets underline their secularism is on issues like euthanasia, or as they like to call it, the "right to die." Reuters reporter Sabela Ojea issued a very one-sided dispatch from Spain with a hope-and-change headline: "As Spain readies euthanasia law, dying sclerosis victim senses hope."

Ojea began where these articles always begin, with the sympathetic sick person with a death wish:

Painfully aware that his advancing illness will eventually leave him on life support, Spaniard Mariano Lopez has his hopes pinned not on a cure but on a parliamentary bill that would allow him to meet death on his own terms.

The government expects to make Spain the fourth country in Europe to decriminalize euthanasia and assisted suicide before its terms ends in 2020.

Right now, helping someone end their life carries a jail term of up to 10 years, and while there are still pockets of resistance in the traditionally Catholic country to dispensing with that penalty, for Lopez the debate is over.

Actually, for Reuters, the debate is over. There's no one in this article who objects to the "progressive" suicide pushers. It's certainly heartbreaking for people like Lopez, suffering at 49 from the horrific degenerative disease ALS. Notice how Reuters notes (with palpable pride) that the Catholic Church hasn't influential since the fascists were turned out in 1975:

The Catholic Church -- long a lodestone for public opinion in Spain -- considers euthanasia to be morally wrong, and the main conservative opposition People's Party (PP) also wants it to remain a criminal offense.

But the church's influence has been on the wane ever since Francisco Franco's dictatorship ended in 1975.

The most recent national opinion poll taken last year showed 84 percent support for euthanasia, and most parties other than the PP have said they will back the minority Socialist government's demineralization bill.

The previous Socialist administration demonstrated its liberal credentials in 2005, when Spain became the third country in the world to allow same-sex marriage.

The secular-progressive media cheers the gay marriage in Spain, celebrates the transgender Miss Universe contestant from Spain, and now welcomes the approach of assisted suicide.

As usual, the leftist argument is aided by movie-makers: 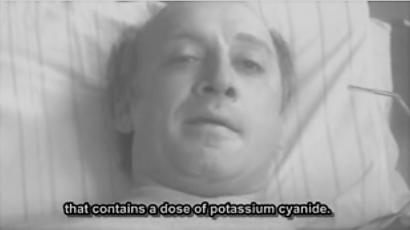 Euthanasia has long grabbed public attention in Spain, which has the world's second-highest life expectancy, and more notably so since Oscar-winning Spanish film The Sea Inside.

The 2004 film was based on the story of Ramon Sampedro, a paralyzed man who for decades campaigned for the legal right to die. Courts denied him that right but he committed assisted suicide nonetheless.

The closest Reuters came to an opposing view came at the end, was a sister who "hasn't come to terms" with the suicide "solution." She says it doesn't matter what she thinks (and Reuters agrees).

His 46-year-old sister Gema has not yet come to terms with the brother’s decision, but says his bravery must be respected.

“If he wants to go on his own terms, it will be done so, no matter what anyone thinks or says,” she said.

Obviously, it would also show bravery to let natural death take its course. For one opposing point of view, the Catholic News Agency found People's Party spokesperson Pilar Cortes, who looked beyond the most sympathetic case:

Cortés also warned of the potential for abuse, noting that in the Netherlands, where euthanasia is legal, there are estimated to be some 1,000 instances of involuntary euthanasia cases a year. She said “given time, exceptional situations will turn into habitual situations” because lethal drugs are more cost effective than other treatments.