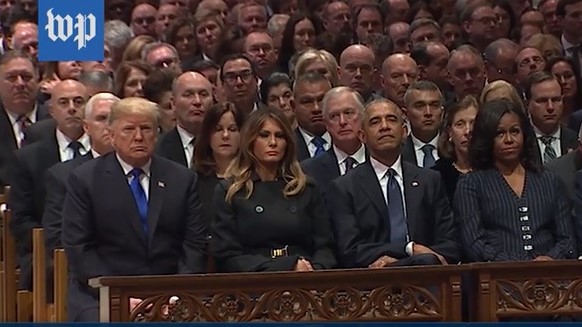 The Washington Post loves to present President Trump as boisterously snide...and quite obviously, they can't imagine anyone would apply that description to them. On Wednesday night, the Post website was boasting at least three articles ripping into Trump's behavior at the funeral, or his bad optics. This isn't a "newspaper." It's an Insult Aggregator.

Let's acknowledge the elephant in the room: the president did present a picture they could suggest was bored or cranky. He only shook hands with the Obamas. Fine. But these "reporters" -- who sound much more like editorial writers -- were trying to make Trump, not Bush, the big story. Even their Thursday headline praising the late president -- "President, patriot, gentleman" -- could be seen as another knock on the current president.

The hottest story, at 11 pm Eastern, according to readers, was Philip Rucker's eventual front-pager Bush funeral: Trump sits with fellow presidents but still stands alone. Rucker described others in the front row...by how Trump had insulted them:

Rucker was cribbing from his Post colleague Aaron Blake, who tweeted the same thing: 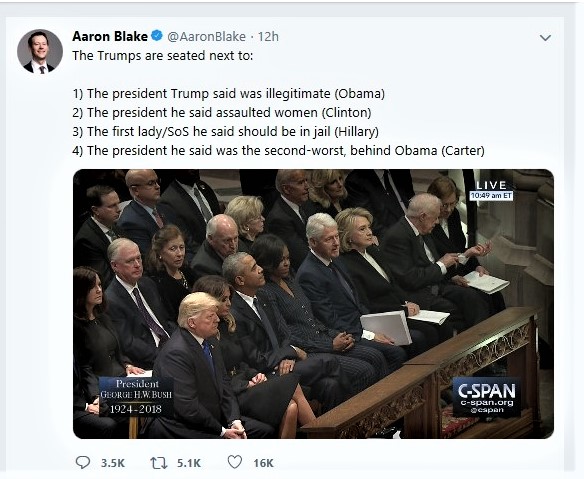 Notice the Post could have done this "reporting" both ways....listing the insults Barack and Michelle Obama offered about Trump, the insults Bill and Hillary Clinton lobbed against Trump, and then the insults Jimmy Carter threw at Trump. But the problem is the Post deeply enjoyed anything they said.

This is why all the lectures about lost civility are remarkably insincere and hypocritical. What has the Post done to nurture civility instead of drop bombs? If Trump is wrong, they think two wrongs make it deliciously right?

The second hottest story at day's end was religion reporter Michelle Boorstein on the recitation of the Apostles Creed:  All the presidents at the Bush funeral service together recited this core prayer. Except one.

Social media, left to right, pounced. The faith and values of Trump have been a source of debate, division, anger and mystery since his run for the presidency began — and especially since many religious conservatives embraced him, despite what critics say is his dishonesty, philandering, crudeness and policies many see as anti-Christian.

Zing! This slam on religious conservatives is par for the course from the same paper who 25 years ago sneered on the front page that followers of Pat Robertson and Jerry Falwell were "largely poor, uneducated, and easy to command." Somehow Bill Clinton never soils his backers with "his dishonesty, philandering, crudeness, and policies many see as anti-Christian."

The top funeral story (by placement) on the website was Greg Jaffe's At George H.W. Bush’s funeral, a magisterial presidency meets one diminished by division.

The smallness (and meanness) was evident the moment President Trump entered Washington National Cathedral for Bush’s state funeral, shed his overcoat and took a seat with his fellow commanders in chief.

Trump briefly shook hands with former president Barack Obama and his wife, Michelle. Beyond that exchange, the four presidents in the front row seemed incapable of even fleeting contact....

Trump, arms folded across his chest, stared stoically throughout, as traits of his predecessor, so different from his own, were praised.

Liberals are never more hypocritical than when they act sad about how somehow, others sow "division" in our politics, when obnoxiously dividing people -- even at state funerals -- is their idea of journalism.