Barbra Streisand granted an interview to Billboard magazine to promote her latest "record." At 76, she's no longer at the peak of her singing powers, but there's a lot she wants to say, and most of it is about that apparently horrible president we elected. 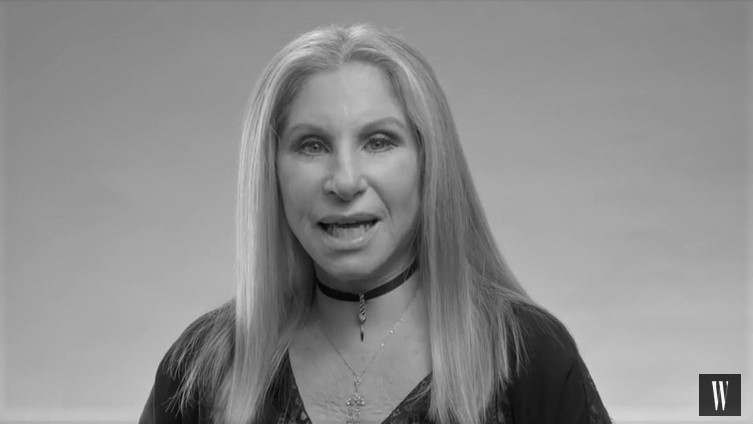 BILLBOARD: Your new song "Don't Lie to Me" seems to be directed at a certain Liar In Chief. Would that be an accurate read?

BARBRA STREISAND: The Liar in Chief, the Groper in Chief.

Yeah, I've written many articles about this… this person… who has no manners, insults everybody, makes fun of disabled people. I don't know what to say, I've written like 15 Huffington Post pieces. This way my way to do my record, because what else could I think about?

It's my protest, in a sense, about this unprecedented time in our history. What it says about America. We have to give up the electoral college system, that's what I know.  I think people should vote for the president of the United States – the popular vote should count. Give people a voice; one vote, one voice.

BILLBOARD: People have talked about it for a long time, and nothing seems to change.

STREISAND: I know, I don't know why. And I don't know why there's still the possibility of hacking voting machines, voter suppression, voter ID laws stopping minorities from voting. It's just so sad to me. I had to write this song. It came out.

The album title isn't subtle: Walls. It's more subtle than her original idea, What's On My Mind. She explained: "I had an idea for the cover, me against this wall. The wall of society, the walls of this presidency, the walls that obstruct justice. Yet there's a light coming in and hope for the future.We have to grow as a nation, we just have to grow out of this and see the light; that's all I can say."

Then there's this weird idea that socialist Streisand can be confused for...the Statue of Liberty?  When Billboard asked her if she was optimistic about Democrats taking back the Senate, as they did in the wave of election of 1986, she said yes, but:

STREISAND: I am, but I'm afraid to be, because we thought Hillary Clinton was going to win and then she didn't. And we weren't sure about the hacking at that moment, but I'm sure that affected her not being made the president. Desmond Child, by the way, wrote a wonderful song for this [album] called "Lady Liberty." And he told me he had the image in his mind of the last scene in Funny Girl where I'm on the tugboat passing by the Statue of Liberty.

The album also includes a mashup of John Lennon's "Imagine" with Louis Armstrong's "What a Wonderful World." She warmly recalled meeting Lennon and his wife Yoko Ono in 1973 at a fundraising concert for Daniel Ellsberg, the radical leftist who leaked the "Pentagon Papers."