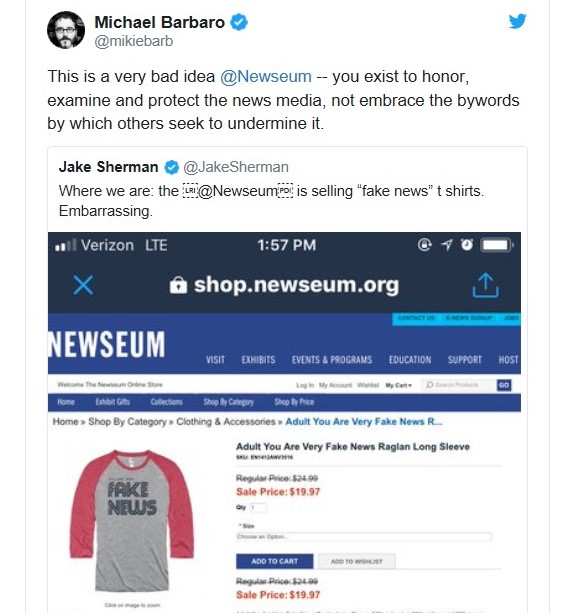 CNN's Hadas Gold channeled the Brian Stelter Corps viewpoint: "@Newseum has a memorial to journalists killed while reporting. So why are they selling “fake news” shirts? It’s one thing to sell political paraphernalia …  it’s another to promote a phrase authoritarian regimes around the world use to stop a free press".

Boston Globe deputy Washington bureau chief Matt Viser ranted "This T-shirt doesn’t belong anywhere. It particularly doesn’t belong at the @Newseum, a place that celebrates journalism and has the First Amendment etched in stone outside its building."

Viser perfectly represents the blind arrogance of liberal journalists. The First Amendment is about freedom of speech. That includes mocking reporters as faking news. "This T-shirt doesn't belong anywhere" sounds like an Iranian mullah, not an American journalist.

Earth to Viser: Your Boston Globe literally published a Fake Newspaper against Trump! Their 2016 predictions were a flop.

Daniel Funke of the liberal media website Poynter.org discovered this item on Friday, and a Newseum PR representative defended the sale. “As a nonpartisan organization, people with differing viewpoints feel comfortable visiting the Newseum, and one of our greatest strengths is that we’re champions not only of a free press but also of free speech." Funke also noted they sell an "Alternative Facts" T-shirt, but naturally, liberals wouldn't want that message squashed.

On Saturday, the Newseum pulled the "Fake News" shirt with an apology: “We made a mistake and we apologize,” the organization said in a news release noted in The Hill. “A free press is an essential part of our democracy and journalists are not the enemy of the people.”

These outbursts against "Stalinist" messaging would seem less unhinged if reporters had a history of harsh rhetoric against free speech being squashed by communist regimes. Instead, the liberal media has a long record of kissing up to communist regimes, as Rich Noyes laid out in his special report Better Off Red. They suggest conservatives are now soft on Russia (that's not the policy right now, ahem). But their softness toward the Soviets and their allied dictators like Fidel Castro lasted for decades.