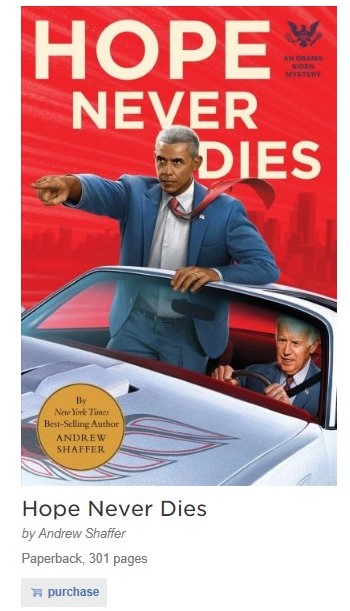 On Friday night, National Public Radio broadcast the usual line about media hostility to the Trump White House: a "robust, free, critical discourse" by the press is "a fundamental tenet of our constitutional system." NPR and other liberal networks fail to acknowledge how their "robust critical discourse" wasn't there when Obama was president.

SHAFFER [with Biden as narrator]: "The moon was full enough to light up the backyard. Our 7,000-square-foot lake house sat on four acres of property. Late at night, it was possible to imagine you were all alone in the world. Tonight, however, I wasn't alone. A head in the woods was the pinprick of light. And now I smelled tobacco, a familiar brand, Marlboro Reds. Don't get your hopes up, I told myself. Hope is just a four letter word."

GONYEA: (Laughter) OK. That is the arrival, of course, of Barack Obama into the pages of your book.

SHAFFER: Of course. That's -- it's a dark, mysterious arrival of the former best friend. And the book is really about two people sort of reconnecting after they've had a little bit of time apart.

Notice in this liberal noir script, smoking is cool, because Obama is doing it. Shaffer said he had to use Biden as the narrator because Obama's brain is just too special to roam around inside:

SHAFFER: I tried to get into Obama's head, but you just can't do it. You think there's so much going on in there. And as soon as you start poking around, it just sort of demystifies that, and he becomes, you know, just a regular guy. And we spent eight years watching him in the White House not as a regular guy. But to me, Joe Biden has always been a regular guy. That's part of his own mystique - is that, hey, I'm just Uncle Joe. I'm Amtrak Joe.

SHAFFER: Some of the most controversial stuff in the book might be the defense of Amtrak that Joe Biden gives in it because he's very passionate about that. But yeah, like I said, it's really down-to-earth. And it doesn't go over the top. I mean, although, there are parts where, you know, Joe Biden might be hanging off of a speeding train by three fingers. You know, it does go to some sort of wild places like that.

SHAFFER: Surely, at some point. They don't call him Amtrak Joe for nothing.

A sequel is already in the works. The NPR audio is here: