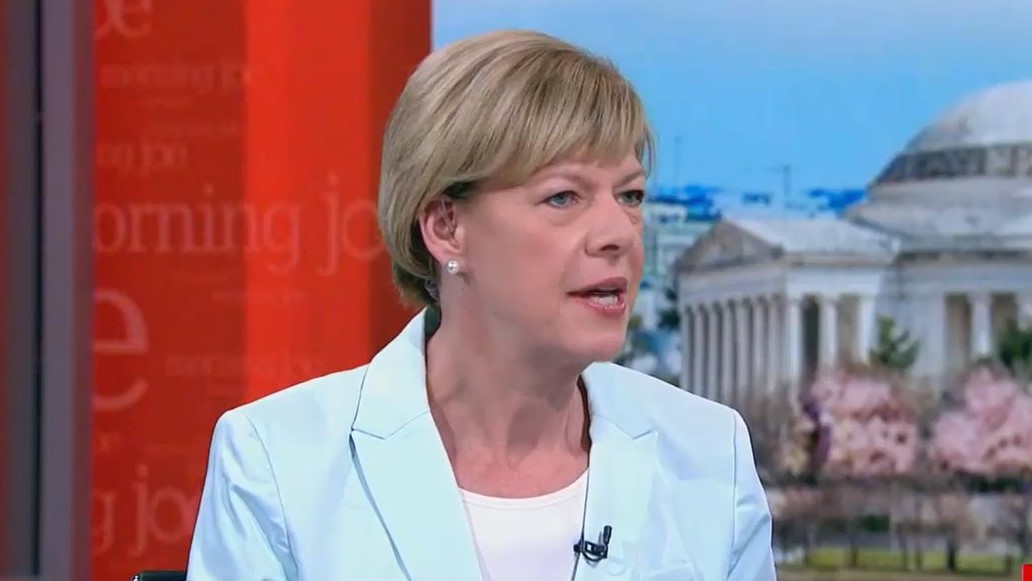 Here's a contrast that shows how the PolitiFact "Truth-o-Meter" is a very skewed instrument. We noted the PF Patrol gave ultraliberal Sen. Kamala Harris a "Mostly True" on July 25 when her facts on apartment rentals weren't factual. By contrast, on July 20, PolitiFact declared it "Mostly False" when a Republican challenger tweeted that ultraliberal Sen. Tammy Baldwin of Wisconsin "opposed displaying the flag and reciting the Pledge of Allegiance or singing the National Anthem in our classrooms."

Did she? Yes, that's true. But it was "Mostly False" because....she later made other more patriotic votes in Congress.

That's not False. It's "that didn't always happen." If a Republican voted once against for a bill to deny a Martin Luther King holiday, PolitiFact would probably not rule that reminding voters of that true vote was "Mostly False" because the Republican later decided that wouldn't look good, and started voting for it.

Leah Vukmir, one of two Republicans competing for the GOP nomination against Sen. Baldwin (primary date: August 14), was the candidate who was wronged by PolitiFact. Notice how PolitiFact mangler Debra Dombrowski can't admit Vukmir said something true:

Is Vukmir right about Baldwin’s position on flag display, the pledge and national anthem in schools?

In the end, Vukmir’s claim comes down to one vote from 22 years ago, ignoring other votes that Baldwin could pull out and cite as evidence of patriotism.

In 1996, the Wisconsin state Assembly voted on a bill that would have required schools to (1) display the flag during school hours, and (2) offer either the Pledge of Allegiance or the national anthem at the beginning of each school day (participation by students non-compulsory). Baldwin was one of two legislators to vote against it. The bill failed in the state Senate.

Dombrowski ruled that not only was Vukmir wrong to dredge up a 22-year-old Assembly vote, "She portrayed the bill Baldwin voted against as one that would get rid of displaying the flag and offering the anthem and pledge in schools, when it was about changing specific requirements around them."

To use our MLK Day example again, if a Republican voted against a King holiday because federal employees have too many holidays, it would be fair to object to the impression that the Republican was racist. But it's not "Mostly False" to say he/she voted against the holiday. The website doesn't call itself PolitiContext. It claims to be a Fact Checker.

As Vukmir insisted in a statement to PolitiFact: "This isn’t a belief of my campaign – it’s Baldwin’s voting record."

PolitiFact has ruled on Vukmir four times -- one False, one Mostly False, and two Pants on Fire. For more proof of their elasticity, the other Republican in the race, Kevin Nicholson? He stated Baldwin co-sponsored a bill to create a Department of Peace and Non-Violence. (She did.) He got a "Mostly True." Although PF's Tom Kertscher insisted Baldwin also backed "certain national defense measures."