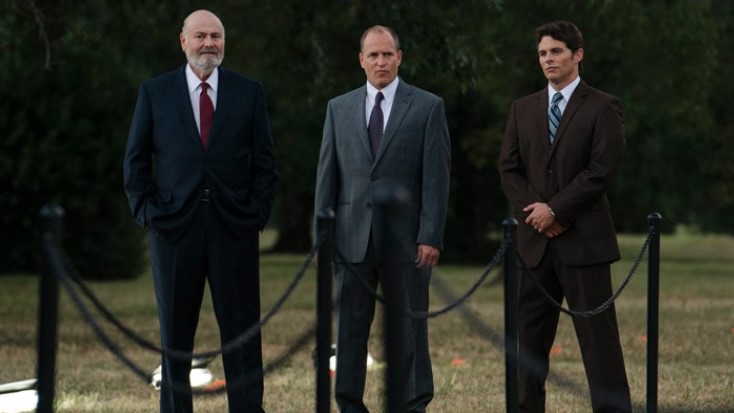 Rob Reiner has a new movie named Shock & Awe that celebrates heroic liberal Knight-Ridder reporters who fought the Bush team’s case for war in Iraq. Liberal critics celebrated it as timely, but not as a great movie. It had stars in it – Woody Harrelson, James Marsden, Tommy Lee Jones, Jessica Biel, and Reiner.

Reiner was the primary promoter of his own film -- with appearances on Jimmy Fallon and "news" shows like Morning Joe, often making the uninintentionally hilarious argument that never before has a flock of national media outlets lined up to sell a president's agenda and paper over his scandals.

Conservatives got a kick out of how Meathead's movie flopped. In its first weekend, it grossed only $45,000. It debuted in only 100 theatres, but the per-screen average was a measly $459.

But the clips didn't have this fun fact: Other new movies did noticeably better with far fewer screens. A coming-of-age movie directed by YouTube comedian Bo Burnham called Eighth Grade grossed $263,000 -- in only four theatres. A movie from Amazon called Don’t Worry He Won’t Get Far on Foot, about a disabled alcoholic cartoonist played by Joaquin Phoenix, grossed $83,000 -- also in only four theatres.

It's not a new trend for anti-Iraq war movies to flop.

Robert Redford's Lions for Lambs limped to a $15 million gross in 2007, despite ABC promoting the movie with a pile of interviews, and it cost $35 million to make. (But Europe liked it.)

Variety's review of Reiner's film was blunt: "The shock is less than shocking and the awe is less than awesome." The key words included "well-meaning" and "clunkily executed." Washington Post film critic Ann Hornaday also thought the movie had a "righteous" point, and yet "this earnest but starchy tale is saddled with windy, expository speeches that possess all the lyricism and spontaneity of a felt-tip pen squeaking on whiteboard."

Back in 2012, Brent Bozell drew attention to Hornaday complaining the war movie Act of Valor, starring actual Navy SEALS. Hornaday lamented that using the real warriors meant it "crossed the line between entertainment and propaganda." It grossed $70 million at the box office. Actor Dax Shepard tweeted: “Saw ‘Triumph of The Will’ tonight, oh wait, I mean ‘Act of Valor.’ great action.”

Maybe Reiner should have just recruited the actual journalists to give their own lectures about the horrid Bush administration.