The PBS NewsHour aired two days of interviews with Bill Clinton and his co-author James Patterson. Friday's was a typical softball interview with the two authors, but on Thursday, anchor Judy Woodruff turned tough enough to tell viewers that Harvey Weinstein was a major financial backer of the Clintons, so she asked Clinton if he knew about Weinstein's transgressions against women. Clinton denied it:

JUDY WOODRUFF: Another subject you have been asked about a lot this week, the MeToo movement, it all began with revelations around Harvey Weinstein, the Hollywood producer. He was a good friend of yours and Mrs. Clinton’s. He gave a lot of money to your campaigns. I guess he also contributed to your defense effort during the impeachment period.

There were so many accusations by women against him. You never had any sense, never heard anything or saw anything about him that gave you --

BILL CLINTON: I didn’t. You know — [long pause] and it’s funny. I think every time — I have thought about this a lot, but every time we were together, I believe, over those years was either at a charity event or a political event, if he was alone, or when his family was around. He was, over this period, married twice, and his family was there. And so I didn’t know. No one ever said anything to me.

Patterson shot back defensively: "And where was the media? I mean, Charlie Rose, I mean, did anybody know about Charlie?" Then he asked why the major media hadn't investigated the "casting couch" problem 30 years ago. That's a pretty good pushback. 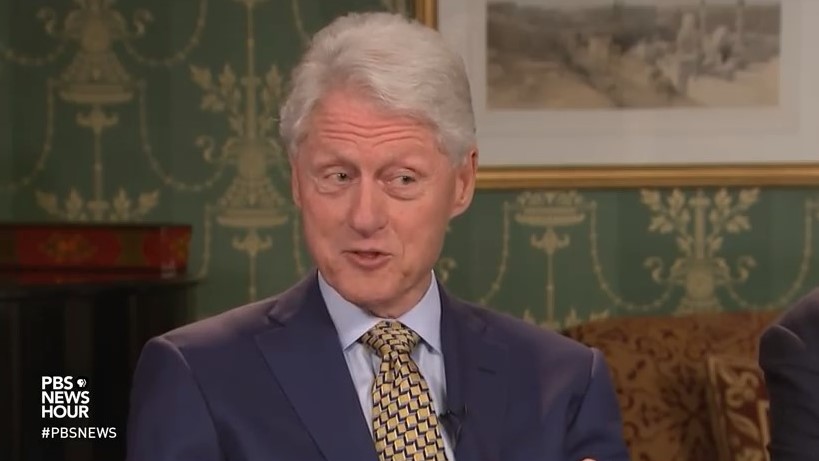 WOODRUFF: Sensitive question, President Clinton. Your relationship with Monica Lewinsky, you have said your impeachment was inappropriate, it was wrong. You have also said that you paid a price, that you left office $16 million or so in debt. Today, you’re a wealthy --

CLINTON:  That was the least of it. I mean, the price that I paid mostly was the pain I caused to my wife and daughter and feeling terrible about the exposure she had, and the way I let my staff down, the Cabinet. I mean, it was awful.

But I had to live with this. I had always prided myself on treating people right and trying to help lift people up. And I have spent the last however many years it’s been since I have been gone trying to model that and make a difference and living with what happened, yeah.

WOODRUFF: You paid a price. Do you think Ms. Lewinsky paid a higher price, a harder price?

CLINTON: Oh, I don’t know. I think she paid quite a price.

But Clinton addedd he was glad she "gave a really compelling TED Talk and built a "bigger, different, broader life."

The turn to Al Franken was truly odd, to see Clinton cheer for tougher standards than he faced:

CLINTON: Well, in general, I think it’s a good thing, yes. I think it’s a good thing that we should all have higher standards. I think the norms have really changed in terms of, what you can do to somebody against their will, how much you can crowd their space, make them miserable at work. You don’t have to physically assault somebody to make them, you know, uncomfortable at work or at home or in their other — just walking around. That, I think, is good.

But Clinton tried to make excuses for Franken and dismiss his accusers: "Maybe I’m just an old-fashioned person, but it seemed to me that there were 29 women on Saturday Night Live that put out a statement for him, and that the first and most fantastic story was called, I believe, into question."