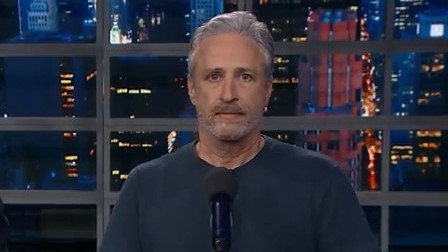 Matt Wilstein at the Daily Beast reports that Jon Stewart dismissed the scandal over Samantha Bee's vulgarity against the president's daughter as phony. In a Q&A session at the Clusterfest comedy festival in San Francisco, “They don’t give a shit about the word ‘cunt,’” he said of Donald Trump (and his voters). “That is probably—he says that instead of ‘please,’ I’m guessing.”

Conservatives are playing a "game," he says:

Seeming to imply that Bee shouldn’t have apologized, Stewart said there is nothing anyone can do to “make them give up this ‘We’re the real victims’ game,” because, “it’s a game, it’s a strategy, and it’s working.”

So if someone insulted Jon Stewart's wife as a feckless (fill in the blank), it would be a "game" or a "strategy" for him to object? Just before that, he explained his theory:

“Please understand that a lot of what the right does, and it’s maybe their greatest genius, is they’ve created a code of conduct that they police, that they themselves don’t have to, in any way, abide,” Stewart said.

The right described him as a “tool of the Obama presidency,” because he made two visits to the White House. Meanwhile, Trump “spoke to the head of Fox [News] and strategized with him on a weekly basis and uses their on-air talent as advisers.” He told liberals, “Don’t get caught in a trap of thinking you can live up to a code of integrity that will be enough for the propagandist right. There isn’t. And so, create your own moral code to live by, but don’t be fooled into trying to make concessions that you think will mollify them.”

The moderator of this Q&A asked if Trump would "slay the dragon" (i.e. Trump). This is where every conservative knows that if you talked about Obama as a "dragon" to be "slayed," you'd be guilty of dehumanizing racism and threats of assassination. At least Stewart suggested Trump should be defeated ("slayed") at the polls in 2020:

When the conversation turned to Stewart’s upcoming set at Clusterfest, the moderator suggested that some fans might be hoping that he will “slay the dragon,” so to speak, when he hits the main stage outside on Civic Center Plaza.

Asked if that’s something they should expect, Stewart deadpanned, “Yes. It ends here. Tonight,” to huge cheers from the audience. “I will say this,” he added. “It speaks to the yearning in America right now that this is a dragon that can be slayed. And I think that he will be defeated by better ideas.”

“Everybody’s looking for a shortcut,” Stewart continued. “It’s really quite simple. What is the opposition party? Oh yeah, the Democrats. If they could come with like, I don’t know what you would call it, a set of ideas. And then they would say them in a way that didn’t seem fucking weird. And then, like, the people would—understanding how the Electoral College works—vote and then I’m assuming at that point he has to leave.”

In a different Wilstein piece, Stewart is quoted as saying "You could not find a kinder, smarter, more lovely individual than Samantha Bee. Trust me, if she called someone a cunt...” And:

After comparing Trump to an incurable virus, Stewart warned Democrats against relying on the Mueller investigation or any other scandal to force Trump out of office before his first term is up. “In the same way that Donald Trump doesn’t really care about the word ‘cunt,’ let’s be honest with ourselves,” he said. “We don’t really give a f--k about Russia.”