CNN claims in its advertisements that it's all about "Facts First." So what would explain fan-girling CNN articles like this one?  "A brief history of how Parkland survivor David Hogg keeps schooling lawmakers on social media." CNN's Isabella Gomez and Christina Zdanowicz began:

In under 280 characters, David Hogg has mastered the art of the clapback.

The Parkland survivor rose to the spotlight after demanding that lawmakers "take some action" following the shooting that claimed 17 lives at his school.

But as some politicians go online to discredit him and his peers, Hogg proves that no one is more social media savvy than a teenager on a mission. 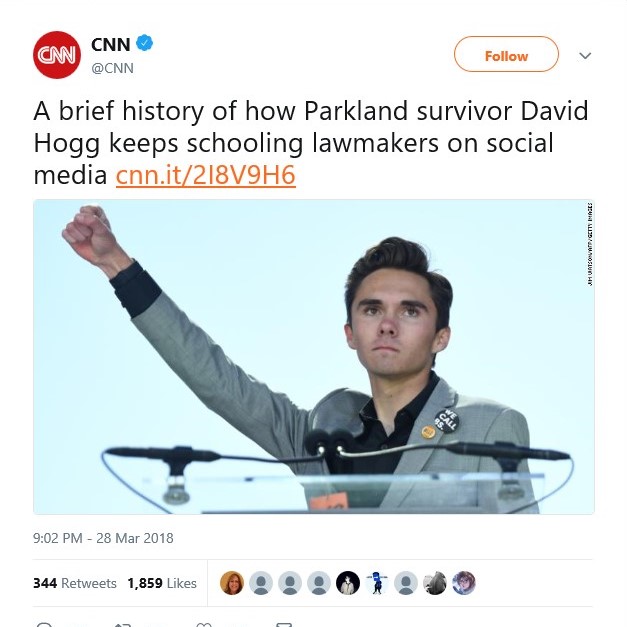 The lawmaker being "schooled" -- according to CNN's fan girls -- is Rep. Steve King, who tweeted: "If you are a teenager & believe you won’t be responsible enough to own a gun until 21, why should you vote before 21?" CNN didn't actually quote King's question.

Hogg replied: "Maybe because so many of us are gunned down before we even become 21 @SteveKingIA you prove exactly why so many American's are done with politicians like you who only have the goal of dividing America to make us weaker."

If anyone needs to be "schooled," perhaps Hogg should be told "Americans" doesn't need an apostrophe.

Then CNN skipped quoting King again as he questioned Emma Gonzalez wearing a Cuban flag patch at the Saturday protest: "This is how you look when you claim Cuban heritage yet don't speak Spanish and ignore the fact that your ancestors fled the island when the dictatorship turned Cuba into a prison camp, after removing all weapons from its citizens; hence their right to self defense."

"She's a beautiful woman of Cuban descent and we love her," he responded. "You would too if you ever got the chance to meet her. We need to love each other as Americans regaurdless of our descent, ethnicity or race. #LoveTrumpsHate"

Which he followed up with, "Also who's running against this guy."

This is "mastering the art of the clapback." With spelling like "regaurdless."

CNN's writers lauded the Parkland leftists: "During a CNN town hall, they challenged the Florida legislator and NRA spokeswoman Dana Loesch on gun laws." They weren't specific: that Cameron Kasky told Rubio he reminded him of mass shooter Nikolas Cruz, and that Emma Gonzalez suggested to Loesch she would be a better mother to her children. "#LoveNotHate," right?

Then the CNN duo touted how Hogg taunted Rubio about the NRA after he tweeted about achieving "meaningful change" and his talk with the parent of a Parkland victim. Naturally, CNN didn't quote Rubio.

"You can too Rubio, by denouncing the NRA or resigning," he replied. " I'll gladly pay the $1.05 for you to do so. Denounce them and join the revolution, for you know how these people at the NRA scare and manipulate politicians far more than anyone."

In fact, many marchers wore $1.05 price tags during the March For Our Lives, which were meant to represent the total sum of NRA donations Rubio received divided by the number of students in the state of Florida. This, they believe, is how much the lawmaker values the life of each student.

How is a lipstick-on-a-Hogg story like this match a motto like "Facts First"? It's a one-sided advertisement for the Parkland leftist kids.

Oh, wait! CNN is not alone. Evan McMurry of ABCNews.com did it, too. The gushy headline is "Parkland student David Hogg has spent the past several days dismantling his opponents on social media."

Which valentine came first, and which was copying? They are tremendously alike, quoting the same tweets (although ABC didn't address Rubio).